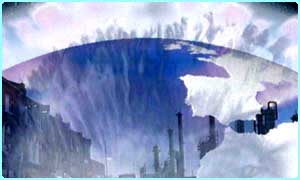 On the whole, the media and most commentators have been underwhelmed by the latest bit of global warming scaremongering, the Stern Report, which produced a good deal more heat than light. The only people who have announced themselves to be really really excited by it have been politicians who, not altogether surprisingly, decided that the only answer to all the problems is higher taxation. Whatever the question, that tends to be the politician's answer. (Or, alternatively, ID cards.)

When this subject was discussed on 18 Doughty Street last Monday (yes, I had better admit, somewhat belatedly, to appearing on its Vox Politix) I was rather surprised by the fact that my two co-disucssants, political bloggers both, appear to have swallowed the propaganda wholesale. One argument was that if all politicians agreed on this, there must be something to the argument, as those politicians must surely believe in what they are saying. Why else, etc, etc?

This was not the line taken by viewers and listeners who wrote in to the programme as we were discussing matters. The messages tended to be on the sceptical side, quoting past climate change, the need to get matters into persective and so on. Nobody made the obvious point - perhaps it was too obvious to make - that if politicians of all parties agree on something, it must be wrong.

There has been a good deal of scepticism on the subject in the media, both on the economic and scientific front. The Stern Report seems to have been playing fast and loose with data and figures.

An interesting response is being published in the Sunday Telegraph. The newspaper is clearly intending to run a series on the subject and various figures to back Christopher Monckton's argument are provided.

Monckton does a good job in showing the unreliability of many of the UN figures, explaining how it managed to "abolish" the Mediaeval Warm Period and produce the infamous ice hockey stick graph, since then disproved by just about every reliable scientist.

Even after the "hockey stick" graph was exposed, scientific papers apparently confirming its abolition of the medieval warm period appeared. The US Senate asked independent statisticians to investigate. They found that the graph was meretricious, and that known associates of the scientists who had compiled it had written many of the papers supporting its conclusion.

The UN, echoed by Stern, says the graph isn't important. It is. Scores of scientific papers show that the medieval warm period was real, global and up to 3C warmer than now. Then, there were no glaciers in the tropical Andes: today they're there. There were Viking farms in Greenland: now they're under permafrost. There was little ice at the North Pole: a Chinese naval squadron sailed right round the Arctic in 1421 and found none.

He also has a go at that famous melting ice cap theory:

The Antarctic, which holds 90 per cent of the world's ice and nearly all its 160,000 glaciers, has cooled and gained ice-mass in the past 30 years, reversing a 6,000-year melting trend. Data from 6,000 boreholes worldwide show global temperatures were higher in the Middle Ages than now. And the snows of Kilimanjaro are vanishing not because summit temperature is rising (it isn't) but because post-colonial deforestation has dried the air. Al Gore please note.

The whole article is well worth reading and the data he provides worth following up.

Of course, Christopher Monckton is a sceptic. Given that the history of science is full of sceptics disagreeing with the consensus and pushing scientific knowledge forward that way, in the teeth of that consensus, it is interesting to see that nothing much has changed in that respect. The consensus still screams blue murder when anyone dissents. They can no longer burn those dissenters at the stake but they can and do try to destroy their careers.

One person who experienced the viciousness of the scientific consensus and its political backers is Bjorn Lomborg, who does not, in fact deny, that there is a warming process going or that it is probably caused by human activity. (Not all scientists agree on the second part of that equation even if they agree about the first.)

Lomborg's sin was and is that he refuses to see global warming as the most important issue or the preferred solution, control of emission as top priority for all countries to adopt. He has pointed out in the past that even if the Kyoto Protocol is fully implemented (and there is precious little chance of that) all it will do is postpone the rise in temperature by six years. The money wasted by the implementation of the Protocol could be better used to ensure that there is clean water everywhere in Africa - this would solve some serious immediate problems.

He has returned to the fray by responding to the Stern Report in the Wall Street Journal. Astonishingly enough, he has to go through all the erroneous and deliberately misleading data that Sir Nicholas Stern (an economist, by the way) has based his blood-curdling report.

The review is also one-sided, focusing almost exclusively on carbon-emission cuts as the solution to the problem of climate change. Mr. Stern sees increasing hurricane damage in the US as a powerful argument for carbon controls. However, hurricane damage is increasing predominantly because there are more people with more goods to be damaged, settling in ever more risky habitats.

Even if global warming does significantly increase the power of hurricanes, it is estimated that 95-98 percent of the increased damage will be due to demographics. The review acknowledges that simple initiatives like bracing and securing roof trusses and walls can cheaply reduce damage by more than 80 percent; yet its policy recommendations on expensive carbon reductions promise to cut the damages by one to two percent at best. That is a bad deal.

Mr. Stern is also selective, often seeming to cherry-pick statistics to fit an argument. This is demonstrated most clearly in the review's examination of the social damage costs of CO2 - essentially the environmental cost of emitting each extra ton of CO2. The most well-recognized climate economist in the world is probably Yale University's William Nordhaus, whose "approach is perhaps closest in spirit to ours," according to the Stern review. Mr. Nordhaus finds that the social cost of CO2 is $2.50 per ton. Mr. Stern, however, uses a figure of $85 per ton. Picking a rate even higher than the official U.K. estimates--that have themselves been criticized for being over the top - speaks volumes.

Mr Lomborg then proceeds to demolish data and argument of the Stern Report.He ends, as usual, with a plea to pay attention to what is happening now, not what might or might not happen in the distant future:

Why does all this matter? It matters because, with clever marketing and sensationalist headlines, the Stern review is about to edge its way into our collective consciousness. The suggestion that flooding will overwhelm us has already been picked up by commentators, yet going back to the background reports properly shows declining costs from flooding and fewer people at risk. The media is now quoting Mr. Stern's suggestion that climate change will wreak financial devastation that will wipe 20 percent off GDP, explicitly evoking memories of past financial catastrophes such as the Great Depression or World War II; yet the review clearly tells us that costs will be zero percent now and just three percent in 2100.

It matters because Gordon Brown, Tony Blair and Nicholas Stern all profess that one of the major reasons that they want to do something about climate change is because it will hit the world's poor the hardest. Using a worse-than-worst-case scenario, Mr. Stern warns that the wealth of South Asia and Sub-Saharan Africa will be reduced by 10 to 13 percent in 2100 and suggests that effect would lead to 145 million more poor people.

Faced with such alarmist suggestions, spending just one percent of GDP or $450 billion each year to cut carbon emissions seems on the surface like a sound investment. In fact, it is one of the least attractive options. Spending just a fraction of this figure - $75 billion - the UN estimates that we could solve all the world's major basic problems. We could give everyone clean drinking water, sanitation, basic health care and education right now. Is that not better?

We know from economic models that dealing just with malaria could provide economic boosts to the order of one percent extra GDP growth per capita per year. Even making a very conservative estimate that solving all the major basic issues would induce just two percent extra growth, 100 years from now each individual in the developing world would be more than 700% richer. That truly trivializes Mr. Stern's 10 to 13 percent estimates for South Asia and Sub-Saharan Africa.

Last weekend in New York, I asked 24 UN ambassadors - from nations including China, India and the U.S.- to prioritize the best solutions for the world's greatest challenges, in a project known as Copenhagen Consensus. They looked at what spending money to combat climate change and other major problems could achieve. They found that the world should prioritize the need for better health, nutrition, water, sanitation and education, long before we turn our attention to the costly mitigation of global warning.

We all want a better world. But we must not let ourselves be swept up in making a bad investment, simply because we have been scared by sensationalist headlines.

There is no question about this. The moment politicians, scientists in positions where politics matters and the more alarmist media agree on a subject, the whole subject has to be wrong. If, on top of that, the argument is based on dishonestly presented data, then it is time to recall what Galileo Galilei said: "And yet it moves".