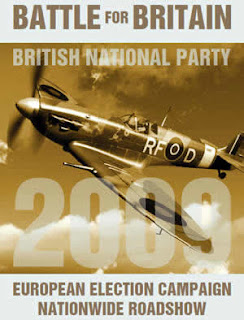 A complaints system in any organisation is the vital lightning conductor which provides early warning of malfunction – one complaint can tell you more than a thousand satisfied customers. Ignore the complaints and you have a problem.

That is one way of looking at by-elections, specifically last night's crop of local council election results, where the BNP made serious inroads. In two Carlisle wards, they scored respectively 9.5 and 19.7 percent, in Newcastle under Lyme they picked 20 percent and in North Warwickshire the score was 21.6 percent.

The Newcastle Ravenscliffe ward was particularly interesting. The Tories won the seat with 229 votes, but only just seeing off the Labour challenger who came in at 213 votes. Yet, in May 2008, the Tories picked up 399 votes as against 224 for Labour.

Neither is there any comfort for UKIP. In the single seat contested – Newcastle - UKIP polled 189 votes in 2008, tying with the Lib-Dems for third place while this time they trailed in fifth place with 131, behind the Lib-Dems at 149.

The usual health warnings apply, but the BNP regards the contests as a "temperature gauge" in the two key areas of the North West and West Midlands, just three months before the euros on 4 June. On last night's showing, they are confident of winning two seats in the EU parliament.

While the media might be content to ignore these results, and largely ignore the BNP altogether, it is very clear that Labour takes the threat seriously. And they are not the only ones to do so.

Tony Travers, director of the Greater London Group, London School of Economics, is looking to the eventuality of the BNP winning control of a major authority. He suggests that it is "difficult to imagine senior officers being willing to work with such an extremist administration." Whitehall, he writes, "will be forced to intervene, though it not entirely clear how."

Travers thus warns that the rise of the BNP is a national political problem that should draw together politicians of all the major parties at central and local level. Conservatives, he argues, can sometimes beat the BNP where Labour can't. Any significant successes in this year's elections should trigger a visible and co-ordinated political response. In truth, he concludes, this should already have happened.

One thing Travers seems to have missed though, is the possibility that BNP is also pulling votes off the Tories – as the Newcastle and Carlisle votes could suggest – with the added dynamic of it taking much of UKIP's share, many of those formerly in the Tory fold.

This would seem to suggest that the BNP is a Tory problem as much as it is one for Labour. Depending on how many seats they contest at the general, there is the interesting prospect of a "UKIP effect", where the BNP cream off sufficient Tory votes in some constituencies to cost them a number of seats. That effect could be exacerbated by UKIP votes, the combined effect doing some damage which could sometimes be significant.

One wonders whether Tory HQ has woken up to this possibility. Probably not, as it is still relying on the "heritage" media to tell it what to think. By and large, politicians and those nice little Tory boys from good families, still tend to believe the traditional media has its finger on the pulse, and is actually projecting the mood of the people.

Out here in the wilderness, however, we increasingly look at the media – print and broadcast – as if it was reporting from another planet. More and more, what the claque of self-referential journos say, and decide to report, bears no relevance at all to the real world.

That is where the "complaints system" comes in. If the BNP vote can be taken as such, it is speaking loud and clear. If the "management" isn't listening, then it only has itself to blame.

By the way, the Spitfire picture, used as part of the BNP campaign, has been laughed off as a "gaffe" by BNP as it depicts an aircraft belonging to 303 Squadron, an expatriate Polish unit. What they didn't mention, however, is that it is also a Mk V Spitfire, which did not come into service until February 1941 - well after the Battle of Britain, to which the poster alludes. And who cares? The symbolism of the poster sends its own message.