Well, they are certainly stirring 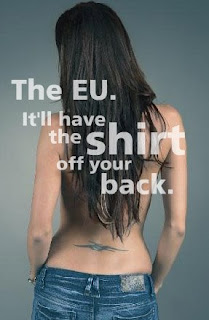 No sooner has the Conservative Party announced that very soon they will leave the EPP (I do seem to recall distributing information about that nefarious organization at a Conservative Party conference over ten years ago, but who is counting?), then we get a grand strategy from at least one eurosceptic MEP, Roger Helmer to be precise.

Mr Helmer has, rather shrewdly at a time of fiscal problems, decided to go for the wallet, arguing that that is the way to the average voter's heart. I am not sure he is entirely correct since the arguments about how expensive and wasteful the EU is have been accepted by one and all for some time but that has got us nowhere. Perhaps it is not the way to the politicians' hearts if, indeed, they possess such attributes.

Toryboy Blog covers the story, complete with puerile comments that were inevitable and, presumably, deliberately played for by the accompanying poster.

As it happens, only some of the points made on that poster (if you have stopped looking at the lovely young lady and the tattoo just above her buttocks) are directly about money. The others are the usual sort of stuff - EU employment rules cost us jobs and reduce prosperity, EU closes post offices etc.

All good knock-about stuff. The only thing neither this posting nor Roger Helmer's own website manages to explain is how voting Conservative in the June election for the Toy Parliament would change the situation. I guess I am not really supposed to ask.