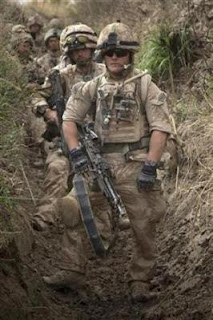 Politics is entering a "silly" mode where what little rationality there ever was flies out of the window. And as we get closer each day to the general election, it will get worse as tribalism dominates the political process and point scoring becomes the sole preoccupation of the political classes.

It is thus difficult to focus on the fact that the business of government goes on, with hard decisions having to be made, some of which will have long-term consequences – and massive spending implications.

One of those areas is, of course, Afghanistan, the escalating costs of which are beginning seriously to alarm the Treasury, more so when today we read that the Army is ready to send another 2,000 troops to theatre, if it gets the political go-ahead, bringing the total number to 10,000. That is significantly more than we had in Iraq.

The news comes on the back of an expected announcement by Obama that he will commit 17,000 troops to an Afghani "surge" amid fears that US public support for the war is eroding to the extent that within the short period of a year the campaign may become politically unsustainable. Thus, we are to expect a major policy statement some time today, which will also encompass the Pakistani issue.

Views in the US are beginning to coalesce on party political lines, the differences in strategy turning into a Democratic-Republican political issue that could feature strongly in the mid-term Congressional elections in November next year.

With that, we can expect some interesting debates on strategy in the US, with a taste of things to come emerging from the current review commissioned by Obama. One official engaged in the review said: "Sending more troops is not the answer. You can send as many as you like, but unless you focus on other things it will not work."

This is an extremely sensible comment and we hope to see it developed, although that is unlikely to happen – in public at least – this side of the Atlantic. For sure, there is a closely argued and at times heated debate going on here but, as so often, it is being conducted behind closed doors.

Such is the venality and superficiality of our political classes and their claque of fellow-travellers that there is little point in opening up the debate. They have so little to offer that they are unlikely to contribute anything worthwhile.

An example of that comes in an article by Liam Fox, where he sets out his "criteria" which must be met "before any more of Britain's over-stretched forces are sent to fight in Afghanistan."

Having just come back from Afghanistan, Fox is suffering from an acute attack of "I was there-itis", blithely quoting a "very senior military officer" as one of the sources of his somewhat less than profound wisdom. So superficial are Liam's offerings, and so peppered with clichés, that it is quite obvious that he is not in the loop. The only fear in this respect is that this man might, some day, become secretary of state for defence.

It is not that what he does say is not sensible in its own right, but the ideas he has imbibed are of the "motherhood and apple pie" variety. This is not where the debate is at – which is concerned with how a desirable outcome can be achieved, bearing in mind that current Army tactics are demonstrably wrong and equally demonstrably failing.

For a taste of what passes for media debate, we can turn to Con Coughlin in hyperbolic mood. He condemns Gordon Brown's "shabby leadership" which he says "betrays our vital mission in Afghanistan".

To win wars, opines Coughlin, you need strong and commanding leadership. Whether it comes from a wily political operator such as David Lloyd George or an inspiring orator such as Winston Churchill, a military campaign requires decisive and effective political direction if it is to achieve success. And, in Coughlin's book, so far as Britain's involvement in Afghanistan is concerned, Gordon Brown's anonymity is fast becoming a national liability.

The man's main complaint seems to be that it is difficult to remember the last time Mr Brown said anything of significance pertaining to the "British military's valiant effort to restore order to southern Afghanistan."

Valiant the military effort might be, but only in the sense of a heroic failure. And there Coughlin, like Fox, misses the point. We know what needs to be done but what is not known, or agreed, is how to do it. Those issues are being thrashed out and, perhaps, with a new CGS in the offing, we might get a change in direction.

Now is not the time for inspirational leadership if, on current form, it would simply be the modern-day equivalent of charging the Light Brigade into the mouths of the guns. Now is the time for cool appraisal and intellectual endeavour. The political rhetoric we can do without.

The same applies in many other areas, and if we had an adult discourse in this country, some of the issues across a wide range of activities would benefit from open discussion. But with political classes in their current febrile mood, it is perhaps best to divorce them from the real business of government. The claque can be left to play their games while the grown-ups behind the scenes get on with real politics.