It is not what they do … 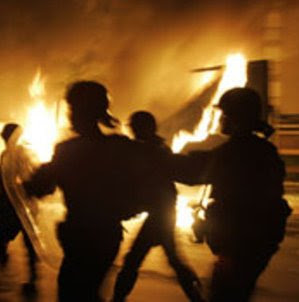 The state of this country is perhaps measured, at least in part, by the relative prominence of four issues placed before the public. The first concerns the rather unattractive Tony McNulty, currently employment minister, and his liberal view of MPs' expenses.

The second is the rather indelicate affair of Nigel Griffiths, described as an "intimate encounter" in his offices in the Commons.

The third issue is a pronouncement by Frank Field, telling us that this country faces wave of possible riots unless the government urgently solves the public finance "crisis". The fourth is that to which we referred in our earlier piece on the "idleness" and ineffectiveness of [some] MPs.

All four issues are, in a rather tenuous way, related. They bring together various skeins of thought that make a whole.

Right up front is the contrast between the first two items and the last. That contrast is between the extent of publicity afforded to MPs when they go off the rails – or are perceived to, in the case of McNulty – as against the relative lack of publicity when they fail to deliver.

The reality, however, is that the MPs, individually and collectively, are equally responsible for the dire state of affairs in which we find ourselves. Theirs is the responsibility to scrutinise the executive, to hold it in check, to sound the alarm when its policies are wrong, and then to force the government to take corrective action.

That much was half-recognised by David Cameron recently when he apologised for mistakes his party made on the economy, "among them not warning about the extent of the UK's debt crisis." Although that apology may have been delivered for tactical reasons, it does point to the constitutional fact that opposition politicians are part of the system, and have a duty to call the government to account.

In labouring on this blog, coming up to our fifth anniversary – with over 8,000 posts in the bag – one thing we have been at pains to explore is the division of responsibility in government. We find irritating the puerile tendency to blame everything on the "government". Equally, we are irritated by the personalisation of politics where every ailment is put at the door of Mr Brown, as if he was personally responsible for everything, and in control of everything.

For sure, the doctrine of ministerial accountability does nominally make department heads and then the prime minister responsible for the actions of their government, but this does not reflect the realities of power - or indeed our constitution.

Much of the power, as we know, lies with Brussels, as much rests with the civil service, with the quangos and sefras and all the interest groups and lobbies which dominate policy. In many respects, the remarkable thing about ministers is not their power, but their lack of it.

On the other hand, ultimate power – as we have so often asserted – lies in parliament. Yet MPs seem to have difficulty in coming to terms with the nature of the institution which they supposedly serve, and fail completely to exercise their power on our behalf. Thus we have that airhead Nadine Dorries blaming the prime minister for the vacuity of parliamentary activity.

It is here that my sorry tale of the Pinzgauer Vector is at its most relevant – not the issue itself, but for what it represents. Imagine what would have happened if, in August 2006 the Commons Defence Committee had looked at the vehicle and said "this is dangerous".

Imagine then, if the committee had said to the minister, this should not be deployed because it will kill people. And if it is sent to Afghanistan, and people are killed, then we will call you in and hold you personally to account. We will "name and shame you" and make sure everyone knows who allowed these killer vehicles into theatre.

This is not at all far-fetched. It was entirely within the power and capability of the Defence Committee to do this. That it did not, when the vehicle – as is now being admitted - had a fatal design flaw, makes the committee equally responsible, alongside the minister and the fools who selected the vehicle in the first place … to say nothing of the senior Army officers who insisted it was bought.

Rather pointedly, I have suggested to the chairman of the defence committee that he prints off the photograph we published on the blog yesterday, frames it and puts it on his desk – as a reminder that this was something he had the power to prevent, and did nothing.

In a way, it is unfair to single out one man for a system fault – a corporate failure in which many were involved. On the other hand, no one is forced to become an MP, still less serve on a committee or become chairman of it. Such people take our money, enjoy the status and privileges and, as we have seen with McNulty and others, do very well indeed from it. The other side of the coin is that you take the responsibility and, in our constitution, the buck stops with parliament. What applies to the Vector could (and should) so easily apply to many other issues.

Personally, as readers will have noted, we take a somewhat sanguine view of the personal foibles of MPs. Even McNulty's liberal approach to his expenses represents a fraction of the cost of one Pinzgauer Vector, slated at £437,000 each, including support costs. This – and many more – are total write-offs, when a properly designed MRAP would have shrugged off the mine and needed no more than a few hours in the workshop before being back on the road.

That brings in a final point – for this post. If we do not understand where responsibility truly lies, we end up blaming those who are not fully in control for things for which they are not entirely responsible, while letting the guilty men off the hook. And if there is no accountability, there is no responsibility. The cycle then repeats itself because there is no penalty for failure.

There, as always, it is the media which does us no service. Story number four should be the headline. What is the difference between MPs who take expenses to which they are not entitled and those who take their pay for a job they do not do?

In fact, there is a major difference. Minor venality costs us thousands. MPs not doing their jobs costs us billions - and lives. Thus, it is not what MPs do which is so damaging to us as a nation. It is what they don't do. If Frank Field's riots do materialise, the real responsibility lies with parliament - but you will not hear that said.