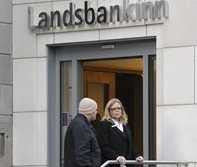 One of the most deadly phrases we hear in modern administration is the mantra "lessons that must be learned".

This we are hearing yet again, this time in respect of the failed Icelandic banks. It turns out that seven English local authorities breached official guidance and their own treasury management protocols in continuing to invest in Iceland after the banks' credit ratings had been downgraded below acceptable levels.

One authority failed to open an email warning of the ratings change, another was using out of date information, while a third exceeded its own limit for deposits in a single bank. Another authority, Havering, invested £2m in an Icelandic bank on 1 October - only 20 minutes before it was told the bank's credit-rating had been downgraded.

In all, according to the BBC, a total of £32.8 million was deposited between the downgrading of the banks' rating to "adequate" on September 30 last year and the collapse of the Glitnir and Landsbanki banks on October 7.

All this information comes from the Audit Commission which says that the Icelandic banking collapse had exposed the "variable" standards of treasury management in local authorities. Treasury managers could and should have been aware that there were risks associated with making investments and that, in particular, there were risks associated with investing in some institutions.

This is the same Commission, incidentally, that invested £10 million in Iceland. As you can imagine, it is insisting that this did not compromise its ability to analyse what went wrong. "We found that most local authorities heeded the warning signs about Icelandic banks," says chief executive Steve Bundred. "But some did not, and a number were negligent. Our report shows that there are lessons that must be learned by everyone."

There is a very simple point to make here. Could we please have public authorities learn their lessons, before disaster strikes, rather than afterwards? Or is that too much to ask?