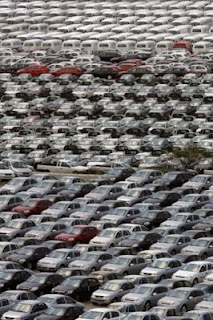 Some stories you are aware of, but only half watch: "car maker in trouble … ". One yawns and moves on. As the GM story moves into high gear though, the extent of the crisis suddenly dawns when you realise that the company has made an $82 billion cumulative loss since 2004. That, by any measure, is a serious hunk of money.

With the company mooting Chapter 11 protection – or even outright insolvency – the shockwaves radiating out from Detroit are giving the Germans a hard time. Interior minister Wolfgang Schäuble is telling the European subsidiary Opel to stop messing about and "jump". It should opt for insolvency as a more favourable way of dealing with the company's problems.

Unsurprisingly, there is an ulterior motive here. Schäuble is worried that if he does dosh out some state money, which Opel would prefer - it will be siphoned off by the parent company and end up lining pockets in Detroit. That is definitely not what German money is for.

On the other hand, the sheer scale of the problem is daunting. Opel has four plants in Germany and directly employs around 26,000. There are thousands more workers in Poland, Britain - where the Vauxhall is produced - Belgium, Portugal, Sweden and Spain. The knock-on effect on distributors and dealers would cost 300,000 jobs in Europe as a whole and 100,000 in Germany.

However, time is running out. General Motors has warned that it will go bust within 30 days unless it gets some more money from the US treasury, having already received a $13.3 billion in loans and now wanting another $16.6 billion more.

These are such staggering sums of money that they are barely conceivable, although we are already blasé about such sums, having seen Brown "invent" an extra £75 billion to dole out to his pals in the banking industry.

The bottom line, though, is that it is real money that has to come out of our pockets one way or another. GM shares fell 22 percent yesterday in New York and have lost 94 percent of their value in the past 12 months. A lot of people will be paying for that in reduced pensions.

The trouble is that there does not seem to be any end to these eye watering losses, and soon enough the plug is going to be pulled. And what will the "colleagues" do then, poor things, when they put out their hands and there is nothing there for them.

Perhaps we'll have Mr Barroso telling the starving masses: "let them drive cars". There's plenty of them about.