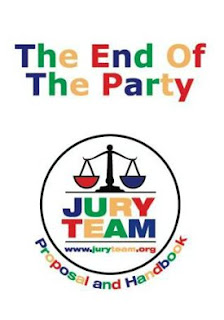 Another week, another party launch. Last Monday it was the turn of Jury Team, Sir Paul Judge's brainchild (though, quite honestly, I am not sure anybody's brain was much engaged in the process). This event took place in Millbank Tower, rather than One Great George Street, which was something of a mistake. The latter is a much more attractive venue and right in the heart of Westminster. The former is a rather ghastly and characterless structure some distance away from the nearest transport points.

Once again, I compared it to Kilroy-Silk's launch of Veritas and once again I had to admit that the buzz was not there. In fact, the media did not seem to be there either, which may have been the fault of the organizers. The time and place of the launch remained something of a mystery till the week-end and this was not a big enough story for journos to drop everything at 24 hours' notice.

Furthermore, it was not clear whether the event was for the media or for potential supporters, members and candidates. The questions certainly came from the group of potentials but there was, as it happens, very little time for questions. Despite assuring us over and over again that this was a new kind of politics that relied on the internet, mobile phones, social chat sites like Facebook and My Space, twitter and all other suchlike activity, Sir Paul and his co-panellists spent an inordinate amount of time explaining various aspects of the enterprise, quoting liberally from the Jury Team website.

A long posting that describes the launch and muses on what Jury Team stands for (or not) on EUReferendum2.