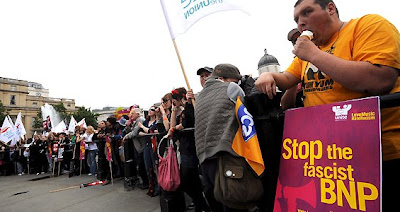 There is a good round-up piece by Bruno Waterfield today, with him writing of the "Return of the East-West divide: European Union in chaos as global recession deepens."

A lot of it seemed awfully familiar though, and indeed it was. Many of the issues explored were rehearsed in Deutsche Welle on 24 February – three weeks ago – reviewed by us on the same day.

This is no reflection on Bruno – he could have written a version of today's article any time in the last three weeks, had he been given the space. It more accurately reflects how low down the food chain comes news on EU politics, despite their importance to us.

The debate about whether MPs (of the male variety) should wear ties in the House gets more overall coverage in the British media (and "political" blogs). Meanwhile, if you want an analysis of how and why the BNP is experiencing electoral success, go to the Al Jazeera website.

Interestingly, of late we have been lamenting about the paucity of coverage over defence policy, on the EU and on the bias on "climate hysteria". But that really does tell you all you need to know about the British media.

Nevertheless, the author of the Al Jazeera piece reckons that the June euro-elections will be a "wake-up call". I suspect not. It is more difficult than that to wake people from a coma.