Whatever you do, don't listen 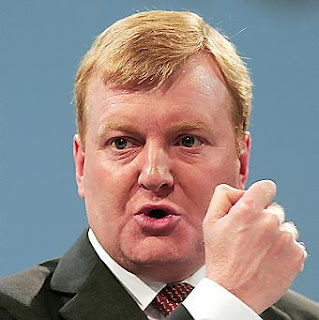 Bursting into the news again, that towering political giant has returned to the arena to steady the nerves of his troops, on the eve of an epoch-making battle.

This is, of course, Charles Kennedy, who is dominating the headlines – well of Scottish TV - telling his party at their Scottish conference that "they must not modify their position on the European Union."

With the euro-elections coming up, and obviously aware that his darling EU is not currently running top of the popularity stakes, our Charles is obviously terrified that the Lib-Dims might actually respond to public sentiment and say something not terribly nice about the "colleagues" in order to get elected.

Enjoining members to hold the line, he tells: "Sometimes, just sometimes, political parties do best when they are bold, say exactly what they think, and challenge conventional wisdoms, even on the most controversial and divisive issues of the day."

Kennedy calls in aid the party's decision to oppose the military intervention in Iraq. This was taken a time when there were large levels of public support for the action recommended by the Labour Government, he says, which just goes to show that doing the unpopular thing can be best in the long-run. After all, look where the Lib-Dems are now.

Such is the world that this creature inhabits that he tells his faithful that the Lib-Dems had to address the "conundrum" that, despite decades of "negative" coverage of Europe, support for the EU and for eventual membership of the single currency was higher than support for the Lib-Dims.

Quite how he equates a general – and rather suspect - poll on sentiment with one on voting intentions is anyone's guess but there you go. Mr Kennedy believes that, "In a period where so many long-standing assumptions have been so dramatically called into question … the forthcoming campaign is far less likely to be susceptible to exploitation by the eurosceptics."

Funny enough, the delegates could see his head when he was talking. He must have a spare one for such occasions.