Has Parliament permitted it? 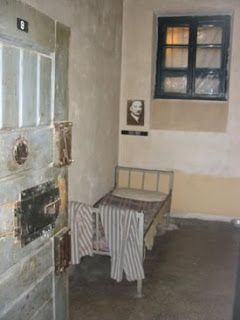 Alasdair Palmer today is getting worked up about a particular EU legislative monstrosity, under the heading, "You can forget about getting British justice."

However, while there is some fine rhetoric in the piece, it is a little difficult at first sight to work out precisely of which Palmer is complaining. The thrust is about extradition but only when you put the bits together do you find that that he is writing about trials "in absentia" in other EU countries, where a British citizen can be found guilty of an offence and sentenced to imprisonment, then for extradition to be demanded for that person to serve that sentence.

Up to press, we are told, such trials in, say, Romanian courts are treated with the scepticism they deserve. British courts have the power, at present, to decide that it would not be in the interests of justice to extradite a Briton who was not present at his own trial to serve his sentence in a foreign jail (Romanian cell illustrated).

However, "under the new regulations" – so Palmer writes - we will lose that power: our courts will be compelled to order the extradition of British citizens to any EU country that wants them. The state that wants to extradite a Briton will simply have to sign a form which says that it told the Briton of his trial, and gave him some form of legal representation.

It looks though as if Palmer has lost the plot here, for he tells us that, "Our Government has not just enthusiastically endorsed the new regulations: it has sponsored the legislation, passed by a huge majority in the EU Parliament last September." He thus seems to be under the misapprehension that this new provision comes into force under the aegis of EU regulations, approved by the EU parliament.

This is not actually the case. What we have here is Council Framework Decision 2008/909/JHA …

… of 27 November 2008 on the application of the principle of mutual recognition to judgments in criminal matters imposing custodial sentences or measures involving deprivation of liberty for the purpose of their enforcement in the European Union.

The crucial issue here is that it is a framework decision made by the Council under the Justice and Home Affairs pillar which originated in the Maastricht treaty.

As such, it is Council decision, which requires unanimous approval – it is not a matter for the EU parliament. For sure, the EU parliament did stick its oar in, asking the Council to consider some additional "safeguards", a resolution which it adopted on 2 September 2008 by 609 votes to 60, with 14 abstentions.

Thus it was that the Council, and the Council alone approved the measure on 27 November 2008 – which brings us to the point. A framework decision of this nature is similar in principal to a directive. It is binding on member states, but the mechanism of implementation is left open for the member states to determine. Thus, for it to take effect in the UK, it must be transposed into UK law.

Here, the trail goes cold. Despite extensive trawling, I cannot find any UK instrument which actually implements this decision. Nor can I find trace of any recent debate in Parliament on it.

To get it into UK law will require an amendment to the Extradition Act 2003 and it may be that the government is sneaking such an amendment through the Police and Justice Bill, currently going through Parliament. But if it is actually in the Bill, then this is by no means clear. If it is not there, it could of course, be sneaked in at a number of stages.

However, on the face of it, it does not look as if this provision is yet in force – and it can only take effect with parliamentary approval. Has Parliament actually permitted it? And if so, why? Does Mr Cameron, who opposes further integration actually support this measure?