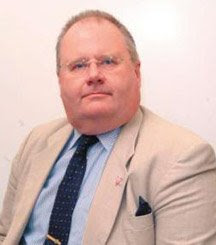 There is a rather confused story about of the party hosted by genial Tory Party Chairman Eric Pickles (who bears an uncanny resemblance to Peter Simple's character, 25-stone Alderman Foodbotham) getting a tad out of hand.

Two guests started an altercation, the police intervened, the officer was struck and CS gas was used on the two altercators, one of whom has been arrested.

CS gas seems a little excessive for what was clearly a drunken brawl of the kind the police elsewhere have to deal with routinely, as is all this talk about breaching security. The two men involved may not have had passes but they were clearly guests of the aforementioned Alderman Foodbotham Chairman Pickles.

The BBC thinks that the person arrested may have been a journalist. Letting journalists into the House of Commons may well constitute breach of security. The Speaker should look into it.

I understand Tim Montgomerie of ConHome was there at the party. He will most probably blog about it tomorrow.

UPDATE: Well, I was half-right. Tim mentions the party and its unusual conclusion but most of the posting is about the Mini-Messiah, a.k.a. Daniel Hannan MEP and the need to provide him with prime speaking slot during the Conference. Depends whether the Conservative leadership want to destroy Mr Hannan's credibility. If they do, they should certainly give him that prime slot.