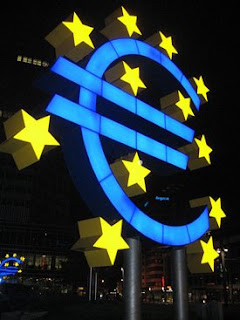 It cannot be a coincidence that we are now getting a rash of media stories speculating about the possibility of the collapse of the euro. And, of course, it isn't. Ambrose, after all, has been banging on about this since before the ink was dry on the first euro note. What is different now is that the theoretical possibility now looks closer to reality.

Perhaps the most thorough of the most recent analyses comes from The Times which chooses a fairly level headline for its dissertation, simply noting "Cracks in the euro". Its strap tells us nothing we did not know already, that the economic downturn has exposed harsh differences between EU members. The stronger states are likely to have to bail out their weaker neighbours, it says.

The piece starts with a historical perspective, reminding us of the launch of the euro in 1999, when 3,000 blue and yellow balloons were launched into the grey Brussels sky, and "Europe's financial leaders popped corks on 9-litre champagne bottles." It misses a small but entertaining detail though, which we record in our book, The Great Deception. As the corks popped, the band struck up with a rendition of "Land of hope and glory".

There is very little glory now, and a lot less hope now that the euro – which hitherto has enjoyed a charmed life – is locked into a battle for survival, rocked by the deepest recession in living memory. But all The Times can do, as the strap itself does, is re-state exactly that of which the naysayers were warning at the time – that the "one size fits all" economic regime which accompanied a single currency could do nothing else but create problems.

The central issue, as it always was, is the arcane issue of "fiscal transfers", the willingness of the richer countries to bail out the poorer areas which are deprived from seeking their own salvation by competitive devaluation and adjustments of interest rates.

As long as the good times rolled, this was not a problem but now that whole economies are heading for Carey Street, this is top of the political agenda. Greece and Ireland are at the top of the list needing bail-outs, followed by Portugal and possibly Italy, Austria and Spain. And then there are the central and eastern European countries, not in the eurozone but also needing assistance, which muddies the water no end.

Jean-Claude Juncker, prime minister of Luxembourg and head of the euro group of finance ministers, is telling us that, "The credibility of monetary union is at stake." But it all boils down to whether the taxpayers of the bigger and historically wealthier countries like Germany are prepared to carry the additional tax burden of problems elsewhere, at the fringe.

With a general election in Germany this year, Merkel is going to have to box clever if she is to get this past the voters and the indications are that she is going to have problems. Thus we get Derek Scott, former economic adviser to Tony Blair, suggesting that the chances are that the eurozone "leaders" go for a short-term fix rather than address the fundamental issues. Perception, as always, will outweigh substance.

It is this which is having serious players asking whether the euro can survive. The Times tells us that half of top American investors already consider the break-up of the euro to be a "done deal". Central banks in Asia and the Middle East are slashing their exposure to the euro, according to debt and foreign-exchange traders, and there has been a collapse of investment from foreign buyers into euro-denominated assets.

Interestingly, Credit Suisse economist Neville Hill is rehearsing precisely the issues that the eurosceptics were raising way back, although they are now becoming mainstream. "It's about the problem of having one central bank and 16 individual policy-setting regimes," he says. "Nobody ever resolved those issues, but they were gradually forgotten about over time."

Chickens are now coming home to roost, and all the clichés can come out to play, not least the observation that our gifted leaders are "flying by the seats of their pants".

The original plan was to go ahead with a flawed construct on the basis that the Monnet dynamic of engrenage would eventually create such stresses that there would be a growing constituency for increased central economic governance, the trigger being the "beneficial crisis". Now that strategy is being tested to destruction and it is anybody's guess as to which way it will go.

Cue therefore, Newsweek with a piece written by Holger Schmieding, chief European economist at Bank of AmericaMerrill Lynch. He asks, "Is the euro at risk?" The risk being considered is its ultimate death, with worries that "Europe's most ambitious integration project to date, could break apart under the strains of the recession."

Schmieding concludes that the notion of a full-scale euro breakup looks vastly overblown, suggesting that the worst of the global crisis will be over, with luck, sometime later this year. Once that happens, he says, trading nations with a focus on investment goods, like Germany, should be able to recover lost ground. Thus, he tells us, the medium-term outlook for core Europe is still encouraging.

Crucially, Schmieding notes that the political logic argues very strongly against a demise of the common currency. All member countries have invested a lot of political capital into the European venture. They are not going to let that go without a gargantuan fight. As we ourselves observed, it is a question of hanging together or hanging separately.

The bottom line says Schmieding is that global investors have bigger things to worry about at the moment than a breakup of the euro zone. In the medium term, he concludes, the crisis may even enhance the position of the euro.

In the third of today's crop, however, we find that no such sanguinity troubles Roger Bootle. He freely writes of "the budding eurozone disaster", a tiresome epic of shallow triumphalism which need not detain us overlong. It revels in the travails of the euro, allowing Bootle to conclude that "we should thank our lucky stars that we have managed to escape the budding economic and political disaster across the channel."

Disasters over the channel, he might recall from history, have an unfortunate habit of exerting their malign influence here. It is one thing, therefore, rejoicing in the British escape from the euro. It is quite another to take any comfort from its demise.

In any case, though, the fat lady ain't sung yet and reports of the death of the euro may be a tad premature. Beyond speculation, no one has the first idea what is going to happen. We are in uncharted territory - all we have is our clichés.