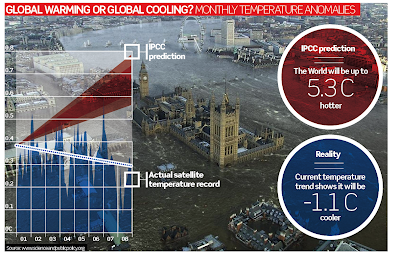 When distant historians come to write an account of the early 21st Century, one hopes they will accord more than a footnote to the events of this past week, and note the extraordinary significance of the almost universal self-censorship of the media on one of the most important political issues of our time.

It is to this which Booker refers today in his column, the only MSM report of the New York Heartland Institute conference on climate change in a week dominated by elevated "climate hysteria" from the Copenhagen conference.

Of the two, the scientific credentials and the gravitas of the former undoubtedly outweighed the shrieking claque of the alarmists in Copenhagen, yet it was to the latter that the media hordes gravitated, clearing space for their ever-more fantasmagorical predictions, all directed at shaping and distorting the political agenda.

The proceedings of the New York conference are admirably summed up in American Thinker blog and it is a measure of just how far the media have abrogated their responsibilities as news providers that you have to go to this site for a report. Booker apart, you will not find anything like it in any mainstream print journal.

Instead, in a classic of its kind, we get The Sunday Times devote two whole pages to climate hysteria. But such is their confidence that chief cheerleader Jonathan Leake does not even bother to disguise the real agenda. He writes:

The director of a Nasa space laboratory will this week lead thousands of climate change campaigners through Coventry in an extraordinary intervention in British politics. James Hansen plans to use Thursday's Climate Change Day of Action to put pressure on Gordon Brown to wake up to the threat of climate change - by halting the construction of new power stations and the expansion of airports, with schemes such as the third runway at Heathrow.

The emphasis is mine, but the words are not. This is nothing to do with science – it is political. The "climate hysteria" movement is a political movement, which – as we pointed out - has an agenda and values wholly alien to those of any liberal democracy.

For the media to have so consistently ignored the Heartland Institute conference yet give such prominence to Copenhagen is akin to it reporting the Labour party conference and ignoring the Conservative conference – it is of that magnitude.

Thus, we see emerging from a political conspiracy a coup d'état. And sadly, while the hysterics dictate the political agenda, the self-referential political claques prattle on, wrapped up in their own little preoccupations, blissfully heedless of the fact that the ground is being cut from beneath them.

That is also something for the historians to note – how the politicians retreated from politics, and ceded the ground to the activists, with the willing complicity of the media. To that extent, last week was a turning point – unrecognised as yet for what it was. The accounting is to come, when people learn that we have truly been sold out.