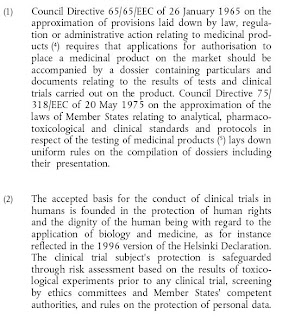 "Medical trials red tape costing lives" complains The Daily Telegraph, doing something useful for once … like reporting the news instead of garbage on "climate change".

It is conveying the views of Professor Rory Collins, Professor of Medicine and Epidemiology at University of Oxford and his colleagues, who tell us that increasing bureaucracy was making it harder for scientists to carry out clinical trials, especially large-scale experiments involving teams from more than one country. The problem, we are told, has led to a drift of trials from Britain to countries like China.

The nearest thing the paper can get to admitting EU involvement, however, is the weak as ditch water label of "European red tape". It really can't cope with the idea that this is an EU directive. Why do they have to treat us like morons?

As they go – being a connoisseur of such things - this is a beauty. We are talking here of Directive 2001/20/EC of the European Parliament and of the Council of 4 April 2001 on the approximation of the laws, regulations and administrative provisions of the Member States relating to the implementation of good clinical practice in the conduct of clinical trials on medicinal products for human use.

You have to give it to the EU commission – they really know how to go for snappy titles.

Anyhow, this nightmare creation had Prof Collins declaring that, "At the moment people are dying unnecessarily because of the way in which the bureaucracy is working is preventing us from getting the information that we need to save lives." He calls for a "risk based" approach which would apply less stringent criteria to trials involving aspirin as those on entirely new drugs.

Collins adds: "The hugely increased bureaucratic burden over the last several years has made it more difficult [to do trials] and inadvertently is killing people."

Thus, hackette Kate Devlin, styled as the "Medical Correspondent", tells us that the "increased red tape" means that all drugs now have to be marked with the individual patient's name, even if they can already be bought over the counter in chemists, at greater expense, especially in trials involving tens of thousands of patients.

Trial co-ordinators, we also learn, are also expected to travel to individual clinics more often to monitor their work, despite evidence that it has no effect on how closely they follow procedures.

Then we get Professor John Bell, president of the Academy of Medical Sciences, warning that Britain now faces "serious obstacles" maintaining its position as a leading research centre.

Here, little Kate Devlin misses a trick. This directive is having a devastating effect on an industry worth more than £12 billion annually, directly employing nearly 60,000 people. And it is brought to us by that wonderful part of the EU commission which calls itself DG Enterprise and Industry.

You could not, as they say, make it up, especially when you read this drivel.