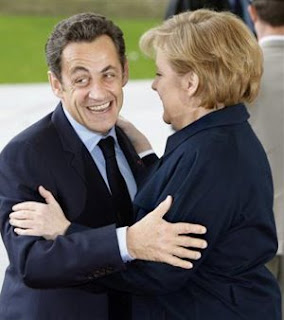 The European Council is meeting today in an attempt to agree a "common position" prior to the G20 summit. And from the BBC we learn that the EU is choking "on cost of economic rescue".

The "colleagues" have been told by Nobel Prize-winning economist, Paul Krugman, that the EU should spend €500bn this year and up to a trillion euros in total over the next three years to revive recession-hit economies.

At the heart of that is the transfer of very large amounts of money from the richer countries such as France and Germany in an "economic stimulus package" to boost the economies of the less wealthy nations.

Needless to say, France and German are slightly opposed to the idea, which means that the cries of the neo-bankrupts are likely to be in vain. Instead, Sarkozy and Merkel have come up with an absolutely spiffing alternative. They are going to propose that the EU should concentrate on "improving financial regulation".

If there was ever any doubt about the existence of a parallel universe, that must surely be banished for ever. We have before us indisputable proof of its presence. It is called the EU, with two of its denizens amongst us.