All over the place! 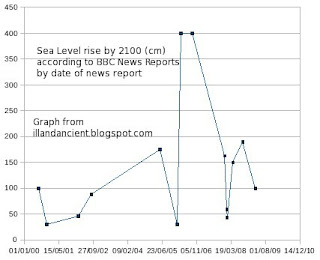 Following our piece on sea level rises, one enterprising blogger has plotted on a graph the various sea level rise by 2100 predictions quoted in BBC articles since 2000.

It seems that the current prediction of a one metre rise by 2100 is pretty much in the middle of the range of predictions that the BBC have reported, which go up to four metres. In this game, it seems, as long as you are a "climate scientist", you can predict any garbage you like and the BBC will rush in to warn us all about the latest variation on Armageddon.

The ultimate arrogance of these people, however, is that while they evidently expect us to take note of what they say, clearly they take no notice of what they themselves have said.

Over term, we are getting a rise of about 3mm per year, although far from the rate increasing, the latest satellite dataset actually indicates a slight fall-off in the rate of increase, thus completely contradicting the latest doom-laden predictions.

Interestingly, with the Seattle Post-Intelligencer predicting a five-foot rise in 50 years – way back in 1986, we should have seen a 26 in rise. In fact, we have seen less than three inches. Yet still, the likes of the BBC take these buffoons seriously. It really does get rather wearying.