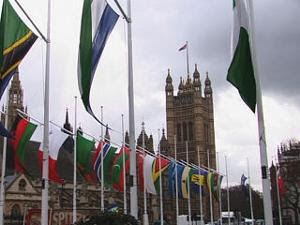 ... whom I loathe more, the G20 circus or the moronic and potentially violent protesters who are out there demonstrating "for jobs, justice and climate" (I kid you not), having arrived in London from all over the country and overseas. Undoubtedly, their preferred methods of transport were the environmentally acceptable bicycle, horse'n'buggy and rowing boat.

Then I came to the conclusion that I did not have to make any choices - they are two sides of the same coin, two aspects of the system we need to destroy if we are to get anywhere with economic and social development, the only way there can be jobs and justice all over the world. The climate can take care of itself though the Archbishop of Canterbury thinks God will not help the world if we continue to allow global warming or climate change. I am not sure that the Weirdy-Beardy has quite understood certain aspects of the Bible. In particular, he may have to re-read the Easter story and meditate on its meaning.

Not only are these two monstrous groups responsible for shutting London down and for wasting quite frivolously enormous amounts of taxpayers' money at a time when people are losing their jobs and businesses are closing down or thinking of it, but they share the same set of attitudes - one side could not exist without the other and the rest of us are outside their particular theorem.

Neither side knows much about economics, nor shows any willingness to learn; neither side believes in freedom and entrepreneurship, which is the inevitable outcome of being stubbornly ignorant; both sides believe in the power of empty rhetoric over actual wealth creation.

Above all, both sides believe, in the teeth of all historic evidence, that the answer to the problems that are facing the world, created to a great extent by the very people who are either discussing them or marching about them (charities, NGOs, aid-workers and general lay-abouts), lies in greater government or transnational control and regulation with as little accountability as possible.

Jonah Goldberg in his seminal book "Liberal Fascism", which has irritated the left in America and has been, predictably, ignored here, points to a similar phenomenon in the United States of the sixties. Chapters 5 and 6 are called respectively: "The 1960s: Fascism Takes to the Streets" and "From Kennedy's Myth to Johnson's Dream: Liberal Fascism and the Cult of the State".

Of course, Goldberg writes about the classical theory and some practice of fascism not the throw-away terminology used by both left and right, europhiliac and eurosceptic. I cannot recommend the book highly enough to those who really want to learn.