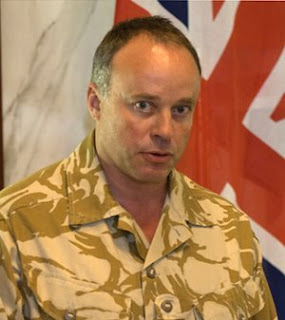 It may be the case that "spin" in its modern form was invented by New Labour, but it is a technique which the military have adopted with gusto – presumably for the same reason – to make up for its shortcomings elsewhere.

Thus, in the wake of Lieutenant-General John Cooper, we now have Major General Andy Salmon, coming up with the view that, "the servicemen and women who had been killed in Iraq since 2003 did not die in vain."

This is so similar in expression, tone and content to Cooper’s pronouncement that it cannot be a coincidence. This is clearly a concerted line that the military "brass" has agreed to adopt, to draw attention away from their collective failure to hold the line in southern Iraq.

And still Salmon is repeating the same drivel that he came up with in early February, claiming that the provincial elections were a "litmus test" for the Iraqi army, which it had passed. It was thus the right time for the British to pull-out because the military task had been achieved. "We have created a secure and stable environment for social and political development to take place."

While, as we have said before, there were good reasons for the failure, and no blame can be attached to the service personnel on the ground who served their masters and were in harm’s way. But it ill-behoves the likes of Cooper and now Salmon to pretend that the campaign was anything other than what it was. The claim that, "We have created a secure and stable environment…" is manifestly untrue.

That Salmon is clearly spouting the concerted "line", however, seems to have been missed by Sean Rayment, who wrote The Sunday Telegraph story. Apparently not having seen the report in The Times on 16 February, he writes: "He [Salmon] is understood to be the first British officer to publicly state that war was worth the sacrificing the lives of British troops."

At least Salmon has the decency to say that it was always difficult to judge whether any military operation was worth the sacrifice of soldiers' lives, acknowledging that, "different soldiers will give you different answers, depending on their experiences."

But it now seems that if you are in the high command, "different answers" is no longer a luxury you can afford. Whatever the question, the answer will always be the same. But the only people the military are deceiving are themselves.