The servants are getting uppity 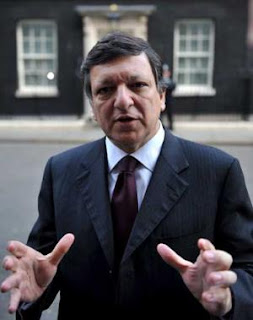 If we are believe some of the more disingenuous europhiliacs – and indeed the BBC, if there is a difference - the EU commission is merely a "civil service" which serves the wishes of the member states.

Although only partly true – the commission is also part of the government of the EU – president José Manuel Barroso has absolutely no business delving in internal British politics, telling the world that Britain will lose influence in Europe if the Conservatives win the general election.

He was referring to Cameron's decision to pull his MEPs out of the EPP and, on a visit to Downing Street yesterday, said: "I regret that decision. My party is a member of the EPP and I regret this decision because in Europe [it is] the main political parties and the main political families that really shape the European agenda... Of course these are the most influential families in Europe."

To be fair to The Independent - which was amongst those who reported Barroso's statement, it got the point. It has published a leader opining that, whatever the merits, or otherwise, of the Conservative's move, "it is a move the Tories are entitled to make."

Thus it asks: "So what, therefore, can be the justification for Barroso, expressing his 'regret' over the move yesterday?" – the paper adding:

It is, to be blunt, none of Mr Barroso's business how a British party aligns itself in the European parliament. The fact that Mr Barroso made his politicised intervention after emerging from a meeting with Gordon Brown makes it all the more distasteful.

This sort of unwarranted interference merely feeds that suspicion that the European Union is a conspiracy of arrogant and unaccountable élites. Let the Commission president think more carefully before opening his mouth in future.

The only disagreement with that is the use of the word "suspicion". There is no suspicion about it. The European Union is a conspiracy of arrogant and unaccountable élites. Apart from that, the paper is spot-on.

That, unfortunately, is not entirely true of Mr Cameron. Elsewhere, he was delivering his monthly press conference and, with the euro-elections in mind, he happily informed us that he believed "… we should be in the EU but we don't want to see further transfers of power from Westminster to Brussels. We think that process of integration has gone too far already."

Leaving aside the declaration of love of the construct, we wonder whether Mr Cameron really knows what he is talking about or understands what he is saying. No doubt he had in mind the constitutional Lisbon treaty, but he has rather a one dimensional view of the EU if that was all he had in mind.

Treaties are in a sense enabling acts. Although they give greater powers or "competences" to the EU, the greater part of the integration process occurs when the commission uses those powers to proposes new policy initiatives and legislation, which are then approved. Thus, there is plenty of scope for futher integration under existing treaties.

If Mr Cameron means what he says about the process of integration having gone too far already, then he should pledge to block any new policy and any new legislation emanating from Brussels. Of course, no Tory government will do this – and nor could it. Much of the legislation is approved under qualified majority voting, or under delegated powers using already approved directive.

Thus, whether or not Barroso thinks that we will be "more isolated" under the Conservatives, the one thing of which we can be assured is that it will make very little difference. The process of integration will carry on regardless whoever is in office.