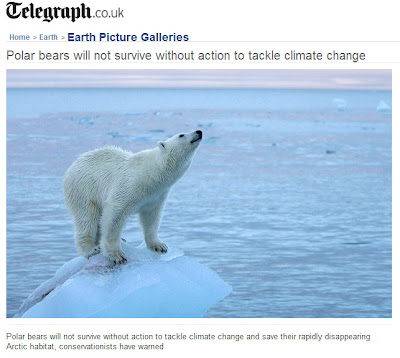 Polar bears will not survive without action to tackle climate change and save their rapidly disappearing Arctic habitat, conservationists have warned – so says The Daily Telegraph website today.

Now read your own newspaper: "The polar bear is being used to spur the world to take drastic action against climate change. Facts derail this call to arms. This is the climate change scare writ small.

In the 1960s, there were probably 5,000 polar bears around the globe. Forty years later - thanks largely to a reduction in hunting - the World Conservation Union (IUCN) counts five-times that many.

The world's 25,000 polar bears live in 20 distinct populations. Two populations are growing. Most are stable. Just two are waning.

The declining populations are in areas that have gotten colder over the past 50 years. The habitats of the two thriving groups have actually become warmer."