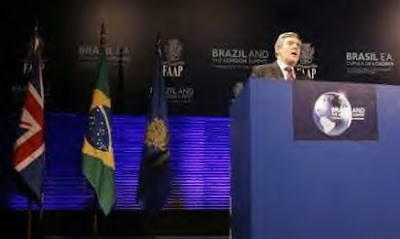 Yesterday evening I happened to be in Trafalgar Square and saw that the fountains had been dismantled and everything that could be covered had been. An anti-G20 demo is expected this Saturday and all sorts of rich white middle class kids will turn up, having flown in from various parts of the Western world to protest against globalization or whatever takes their fancy.

People who work in the City or Canary Wharf (effectively, an extension of the City) have been told that it might be better if they do not come in next Wednesday and Thursday as the self-same spoilt rich kids who do not work anywhere are threatening to demonstrate and police presence is going to be very heavy.

People who live near the ExCeL monstrosity, which will be hosting the G20, already have to produce two different kinds of ID in order to get home. Even in the days when Notting Hill became a besieged fortress for the carnival one ID was sufficient.

Goody-goody. London is under siege, the police is concentrating entirely on the forthcoming problems, the West End and the City are becoming no-go areas at a time when business is already quite slack, not to mention the fact that billions are being spent one way or another on this jolly little get-together.

The purpose of it is what, precisely? Politicians of twenty countries with assorted hangers on and their own thugs will descend on London and mouth stupid platitudes for a couple of days. Nobody thinks they will do any good because they are not the people who can solve the problem – one and all, they are part of the problem.

Of course, there is a strong possibility of them coming up with suggestions that will make matters worse and set back the global economy for many years. You never know: the situation might get so bad that those rich white middle class kids will not be able to fly around from one anti-globalization pro-greenie protest to another.

I am assuming that there will be questions in both Houses of Parliament as to how much the whole jamboree has cost us at a time, let me remind everyone, when people are losing jobs and businesses are closing down, not least because Mr Brown (like President Obama) is mortgaging this country, spending like a drunken sailor money he does not have.

Why, precisely, cannot they talk by video? Or go viral, like our own mini-Messiah? And talking of Mr Hannan, which everybody seems to be doing, I am a little puzzled at the assumption that Mr Cameron aka the Boy-King of the Conservative Party must be furious about the speech. Au contraire, I imagine he is rather pleased. This speech will be a marvellous weapon in the battle for the eurosceptic votes, come the European election campaign.