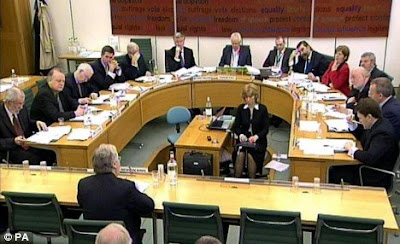 The Daily Telegraph leader, God bless its little cotton socks, is calling for an inquiry into the financial crisis. This comes nearly a month after Cameron asked for the same thing, and four months after we had made our pitch. "Billions spent and we are still left in the dark," the newspaper complains, arguing that, "The case for a public inquiry into the economic crisis grows stronger by the day."

However, it also points up the role of the Commons Treasury select committee, which later this month will publish its report on what led to the virtual collapse of the banking system and how the Government has dealt with the consequences.

We are told It has taken evidence, in public, from most of those directly involved, from the past and present chairmen and chief executives of the major banks and from senior politicians, regulators and Bank officials. As in America, the paper says, "this sort of investigation is best carried out by the legislature." But then it makes a singularly apt point:

However, unlike in America, the parliamentary select committees here are less powerful and more politically inclined. They have a majority that favours the governing party and too often, in the search for a consensus, there is a tendency to pull punches. This is not to say that the select committee has done a bad job. Since we have yet to see its report it is impossible to judge. But there must be a suspicion that it will not have done enough to satisfy a powerful public appetite for clear answers and greater certainty.

The point is well made, and highlights a very specific weakness in our parliamentary system. On our other blog recently, I wrote:

Ultimately, in a parliamentary democracy, the buck stops … in parliament. However powerful a government might think itself to be, it lives and dies by permission of parliament, which can bring it down with one vote of confidence.

Short of that nuclear option, the day-to-day work of scrutinising government is – or should be – carried out by the select committees. They are the bodies that really get down to detail, call the witnesses and examine the documents, producing at great expense detailed reports which, themselves often provide the basis of debates on the floor of the House. That is how the system works … or should do.

The problem is, as The Telegraph also suggests, the system does not work – not only in this instance, but across the board. Committees are under-funded, badly resourced, superficial in their approaches and most often fail to get to grips with the subjects they address.

I do not even know if it is worth trying to put any energy into trying to improve the system, but believers in parliamentary democracy should be concerned that an important part of the system is considerably less effective than it should be – if not an outright failure. To that extent, it is worth a try and, shortly, I hope to publish a long piece illustrating how the system fails, with some suggestions as to improvements.