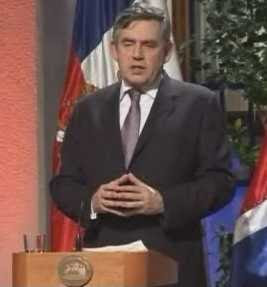 Unsurprisingly, Gordon Brown has "lauded" Obama's strategy on Afghanistan and Pakistan. Speaking in Santiago, Chile, he also used the opportunity to take a sideswipe at other NATO countries, complaining that they should help shoulder the burden of the conflict.

That less than enthusiastic participation of many of our Nato "partners" has already been picked up by one of the few British blogs that takes an interest in foreign affairs, but this is the exception.

Although the US blogosphere has given the Obama strategy a considerable amount, the British blogsophere seems to have been largely silent, despite the considerable implications for British policy, and the longer-term consequences.

Despite its pretensions to be at the leading edge of political comment, therefore, we have an interesting situation where the dead tree media have made the running, while the self-appointed commentariat have opted out of the hard stuff.

Thus, in addition to the analytical piece in The Daily Telegraph, we have The Times on the case, and more analysis in both The Guardian and the Independent.

Any which way you cut it, this event is news and, by any measure, it is highly contentious. In terms of public policy, the fate of British troops, the escalating costs and the effects on our broader foreign policy, there are issues here which are the meat and drinks of politics, crying out for debate. Yet the blogosphere, happy to take on the most trivial of issues, has no opinion on such matters of substance.

This is all the more puzzling when, as The Independent reports, the UK is "seeking to define its role in a rapidly shifting political and military landscape" of Afghanistan. The narrative thus runs that Brigadier James Cowan is spearheading a trial run, through exercises in Kenya, seeking broadly to position British forces as the conduit for winning hearts and minds.

The idea is to move the emphasis away from concentrating on fighting "towards winning the consent of the population, hastening reconstruction and laying the groundwork for reconciliation." The focus is on avoiding collateral damage and participating in shuras and loya jirgas – modelled on meetings with local people in Iraq and Afghanistan – and engagement in development projects, building schools and hospitals.

There is much talk about winning the consent of the people with development projects, but also a recognition that, with the violence sweeping through Helmand, development projects were being stymied. This handicap became particularly acute during the long summer of bitter fighting in 2006.

On the one hand, military commanders were demanding that reconstruction projects should take place on the ground to show the Pashtun population that they would have some compensation for their land being turned into a battleground. On the other, the Department for International Development was adamant that this was simply too dangerous in the middle of a war.

Nothing in the article tells us that this problem has been resolved, nor any recognition that, if reconstruction is too dangerous for civilian agencies, then – as we have observed, the Army must take over the responsibility. But then, neither is there any recognition of the key priorities, in particular the crucial role of developing the infrastructure.

The importance of this has just been reinforced in the
recent update to the US Army field manual on "stability operations" which states, in admirably concise prose, it notes:

Military tasks executed to support the economic sector are critical to sustainable economic development. The economic viability of a state is among the first elements of society to exhibit stress and ultimately fracture as conflict, disaster, and internal strife overwhelms the government. Signs of economic stress include rapid increases in inflation, uncontrolled escalation of public debt, and a general decline in the state’s ability to provide for the well-being of the people. Economic problems are inextricably tied to governance and security concerns. As one institution begins to fail, others are likely to follow.

Infrastructure development, it then goes on to say, "complements and reinforces efforts to stabilize the economy. It focuses on the society’s physical aspects that enable the state’s economic viability." And, of that, "transportation" is one of the main items listed for priority attention.

It says something of the Americans that not only is such a manual in existence but it is in the public domain, but it is freely available for purchase on Amazon. If our anally-retentive military ever get round to publishing anything as comprehensive, you can guarantee that it will be a limited circulation classified document.

But, with such openness, and a blogging community which seems to be able to lift its eyes above its own navel, we even see interesting posts reviewing the contents.

The fear is that the claustrophobic parochialism of the British political blogosphere represents a deeper malaise in society – or at least in the political claque.

The lack of interest in issues of such importance is a sign of intellectual impoverishment which bodes no good for the political health of the nation. More dangerously, a political class which cedes debate on such issues to narrow sectoral specialists is one which also, eventually, cedes power to them. In parochialism lies danger.