Preparing for a lack of power 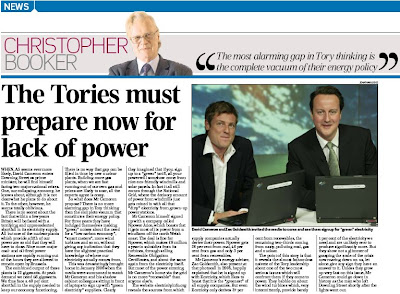 Booker is in fine form today with his column having a go at the Tories for their lack of coherence on energy policy.

This is a subject to which we have made occasional reference although, latterly, we have given up expecting anything coherent, given their last attempt with their "Plan for a Low Carbon Economy". In this, as with so many things, what the Tories actually think is an irrelevance. Whether now or in government, they will simply be reacting to agendas dictated elsewhere. Once in office, the only difference will be their pretence that they are in charge.

Booker's piece attracts an interesting comment which points out that the shortfall in generating capacity is being made up in the short-term by new-build combined cycle gas turbine (CCGT) plants, which indeed seems to be happening. We have, for instance, EDF Energy's new 1,300 megawatt combined cycle gas turbine (CCGT) plant at West Burton in Nottinghamshire, central England. And, only last week, we saw approval for two CCGT plants – a 2GW plant at Pembroke, South Wales, and a 1.02GW station in King's Lynn, Norfolk.

In other words, in the absence of any strategic planning and coherent policy, the generation industry is getting on with the job, making up the shortfall in the best way it knows how. But it is taking a short-term view, with massive price implications and long-term penalties – although the increased capacity will probably ensure that at least the domestic lights are kept burning.

This, of course, presupposes that we have security of supply on gas deliveries which, given the Russian situation and the political instability of our major LNG producers, is somewhat optimistic. It also depends on the provision of additional storage capacity, as we rely more and more on gas-fuelled generation. Again, that is by no means certain.

What these developments do suggest, however, is that if we do end up in the fortunate position of having just sufficient electricity in the short to medium term, it will be in spite of and not because of any contribution from our politicians and government. It essentially consigns them to irrelevance, and allows stupid prats like Prince Charles to sound off, without having to face the consequences of their folly.

We, of course, will have to pay the price, not least in increased energy bills, while future generations will curse us for our stupidity in allowing a valuable resource like natural gas to be wasted on electricity generation. For the time being, though, our "leaders" can revel in their own stupidity, to the applause of the media claque who have no better ideas of how to fill their pages and broadcast quotas.

But then, it was probably never any different.