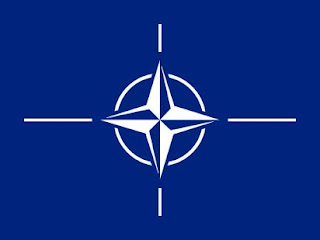 Undoubtedly we shall be writing a great deal about NATO as it celebrates (if that is quite the right word) its 60th anniversary. Here is a small taster: a discussion on RFE/RL of the French Defence Minister's assertions that the organization should abandon its global role and return to its roots with one significant difference - it should not antagonize Russia.

The original aims of NATO, as some of our readers will recall, were to keep America in, Germany down and Russia out. France and Germany seem to have a very selective memory when it comes to those original ideas. One could argue that this rather incoherent attitude led almost directly from last year's summit in April in Brussels (here and here) led directly to the Russian invasion of Georgia in August.

While the discussion with comments from Washington experts is very interesting, we should like to hear from those people exactly what the new policy towards Russia should be. Specifically, it would be nice if Ted Galen Carpenter explained why he thinks that it was the Bush Administration that caused the rise of Putin and what the Obama Administration can do to counteract that, without, we hope, simply rolling over and letting Russia play the big bully in the playground?