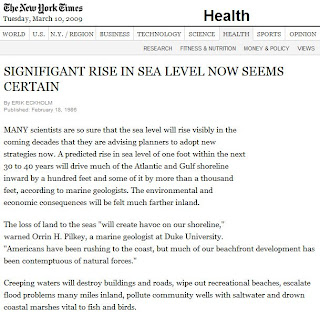 "Scientists warn of catastrophic rises in sea level", shrieks The Times. Many others of the media claque join in, so Lewis Smith, "Environment Reporter" can stand as representative for them all.

He is quoting professor Stefan Rahmstorf, of the Potsdam Institute for Climate Change, who says that unless greenhouse gas emissions are controlled within 50 years the planet will be locked into rises of "tens of metres". Says Smith, he presented data to the conference suggesting a metre's rise by the end of the century is the minimum that can be expected.

"Sea level is rising faster than expected. It's rising much faster than in the models," Rahmstorf told the hundreds of climate change researchers. "I'm afraid it's quite likely we get a substantially higher rise. Even for a low emission scenario the basic estimate here is above one metre."

Actually, Smith is quoting from the press release from the International Scientific Congress on Climate Change in Copenhagen, which is what passes for journalism today.

In fact, you get better value from the press release, as it lacks Smith's edits and spelling mistakes, this egregious hack telling us that the estimate is almost double the projection of 20 to 59 cm made in 2007 by the "United Nations' Intergovernmental Panel on Clinate (sic) Change". 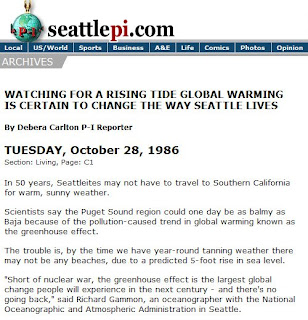 But, hey ho! We've been there before, with the New York Times solemnly warning us that, "Signifigant (sic) rise in sea levels now seems certain" – way back in 1986 … 22 years ago. And it was joined by the Seattle
Post-Intelligencer, giving us similar dire warnings – also 22 years ago.

These people are getting so predictable, they are getting boring. And then we get the fabulously rich Prince Charles telling us that climate change must be tackled before global poverty. "I find it incomprehensible that there are those who doubt the science of climate change," he says.

Hilariously, the same newspaper is telling us that "Prince Charles is 'exploiting the gullible'". But then, I guess, he is far from being alone.