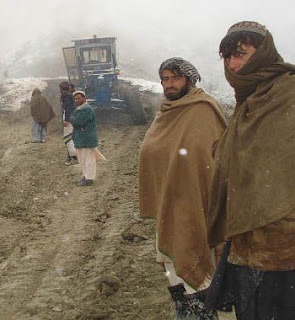 Following our piece earlier today on the change in policy toward Afghani redevelopment, we see in the Guardian News Blog a piece on the French forces in Afghanistan.

The strap, in part, reads: "Roadbuilding in a far-flung valley under the guard of French forces augurs well. " Embedded in the piece, we read:

On the other hand, the breathing space won by the French has allowed work on the road to begin along the lower reaches of the Panjshir river. It is due to be given an asphalt surface within three weeks. After years of pleading from Afghan provincial governors, roads are at the centre of the new strategy being pursued in Afghanistan by the head of Central Command, General David Petraeus, and the force commander in Afghanistan, General David McKiernan.

Last year, the Taliban succeeded in making the main road that rings the country more or less impassable as it passed through the south, suffocating much of the economic gains the government and its foreign backers are trying to eke out.

"We would not even have thought of building this road a few months ago," Spellmon said. When it is completed, trucks will no longer have to sit in long lines in the congested capital on the way north. It will also mean that the seedless pomegranates, for which the Pashtun villages of southern Kapisa are famous, can be taken more rapidly to more markets.

There had to be a reason for the sudden shift in policy that we observed – and thus we see the fingerprints of David Petraeus, leader of the "surge" in Iraq. Note the quoted excerpt: "After years of pleading from Afghan provincial governors, roads are at the centre of the new strategy being pursued in Afghanistan …".

After a redevelopment strategy based around "feel-good" projects, heavily biased towards schools, clinics, gender development schemes, and thousands upon thousands of latrines (I kid you not), it seems that sense is prevailing. The people on the ground have been calling for a shift in priorities for years and, with Petraeus in post, their calls have been heeded.

The interesting thing is that this is a genuine and important shift in policy which, if maintained, could make a strategic difference. But, as we observed earlier, so distant is the media from the reality, it has not taken on board the importance of what is happening.

One can’t avoid noting either that, once again, the Tories have missed a trick. It has been evident for some time that the development priorities have been badly skewed and that infrastructure has not been given the importance it needs. Had the Tories picked this up and been calling for change, they could be preening themselves, claiming a victory. That is one of the arts of good opposition.

But, as always, guess who has recently been making the running! To give him his due, Michael Ancram was on the case in 2004 but, as with so many things, there was no follow-up.

Despite that, things may not look as bleak as we thought, even if there is a long way to go yet.