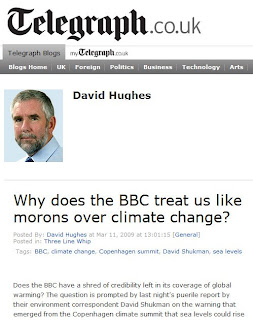 Mr David Hughes writes on his Telegraph clog, "Why does the BBC treat us like morons over climate change?"

Rightly, he asks, "Does the BBC have a shred of credibility left in its coverage of global warming?" Warming to his theme, he tells us that the question is prompted by last night's puerile report by their environment correspondent David Shukman on the warning that emerged from the Copenhagen climate summit that sea levels could rise by a metre by the century's end.

This is a deadly serious topic, writes Hughes. Such a rise in sea levels would have a catastrophic impact on the lives of millions. "So why did the BBC's coverage treat its viewers like morons?"

Having regaled us with Shukman's doings, Hughes then concludes: "Global warming is too important an issue to be covered by such gimcrack reporting. Last night's report simply reinforces the view that the BBC has bought hook, line and sinker the most apocalyptic assessment of the impact of global warming and is not going to allow a more informed and grown-up debate to take place. Is that what we want from a public service broadcaster?"

All good stuff, but has Hughes looked at his own newspaper recently? In its Armageddon section today, we have (amongst other things) an ecological catastrophe in the Amazon (above) and we also have an extra, full page on alarming seal-level rises. And yesterday, we had the tweeetie birds and how the poor little things are suffering from … climate change. Not a day goes by without such drivel.

One suspects that Hughes doesn't actually read his own newspaper. And if he doesn't, who can blame him?