What are they on? 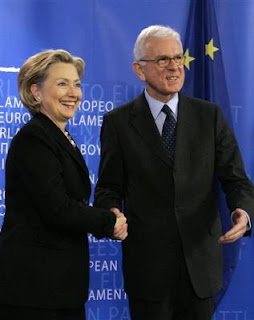 There is a leadership crisis in the world, says Hillary Clinton. America and the European Union must take the lead in addressing it, she says.

She was addressing "young Europeans" in the EU parliament today.

It was an invitation-only event entitled "The next generation takes the floor", at which most participants appeared to be young employees or trainees of the EU institutions.

Nevertheless Clinton complimented Europe on its integration, calling it an "extraordinary international effort". "Europe today is viewed by many as a miracle," she says. The EU was experiencing its "longest period of peace since the Roman Empire," while the countries of the Union have never been more prosperous or more secure.

Speaking for her country, the head of the US diplomacy insisted that despite difficult problems ahead, the new administration is optimistic and "up to the task".

And in response the parliament president Hans-Gert Pöttering described Clinton as a "leader of vision" at a time that the world needs such leaders.

You really can't fisk this sort of thing. It's beyond parody, so much so that, according to Reuters, Clinton almost did it for herself - a self-parodying politician ... they'll put us all out of work.

Having told the junior luvvies that she didn't understand "multiparty democracy", she remarked that it was "hard enough with two parties to come to any resolution." This she said, "very respectfully," because she felt the same way about US democracy, "which has been around a lot longer than European democracy."

That remark, it seemed, "provoked much headshaking", and more was to follow during a working lunch, when she referred to EU foreign policy chief Javier Solana as "High Representative Solano." She also dubbed European Commission External Relations Commissioner Benita Ferrero-Waldner as "Benito."

Who can she have been thinking of?