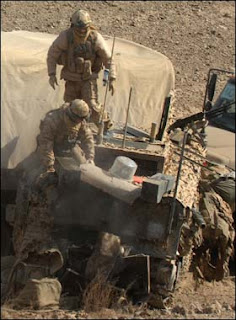 You can be terribly grand and go for the "big picture", as your canvas on which to portray your world view. But sometimes, the "little picture" is just as revealing. Let me take you through a sequence. First, we see an extract from the The Sunday Times (review section) today:

Next day, the eve of the Musa Qala operation, Jonno tried to fit Kevlar armour plates to the seat of his Vector armoured vehicle. But once they were in place he couldn’t get in with his helmet and kit on. Everyone hated the design of the Vectors. They had a crucial design flaw that made the driver or front passenger (usually the vehicle commander) particularly vulnerable to being killed if the vehicle struck a mine. "It's an absolute death trap. I don’t feel safe in this," said Jonno.

"You've just to get on with it," he was told. Everyone knew the problem all too well.

Sergeant Lee "Jonno" Johnson was killed in a Vector in December 2007, blown apart by a mine. He was not the only one. And it was not as if the MoD was not warned. Let us go back to the Booker column for 29 October 2006 based on information supplied by this blog. Headed: "Our troops will patrol in 'coffins on wheels'". It read:

At the heart of the disaster gathering round Britain's military presence in Iraq and Afghanistan is the fact that our Government has in each case sent an inadequate number of troops, hopelessly ill-equipped for the job they faced.

Nothing brings this home more cruelly than the rising number of soldiers who have died because the Ministry of Defence failed to provide them with patrol vehicles properly protected against mines and roadside bombs.

Last week Dutch troops in Afghanistan were supplied with the first of 25 mine-protected Australian Bushmasters, costing £271,000 each.

This means that every other Nato contingent, American, Canadian, German, French and Dutch, now has mine-protected vehicles, but not the British, who still patrol in wholly unsuitable Snatch Land Rovers, like the one destroyed by a suicide bomber in Helmand 10 days ago, in which yet another British soldier died, with a second seriously injured.

The MoD says it will soon be equipping our troops with Pinzgauer Vectors. These are known as "coffins on wheels" because they are in some respects even more vulnerable than the Land Rovers; not least because the driver is sitting right over the wheels when a mine strikes, and because the nature of their armour is such as to confine the effects of a blast within the vehicle, probably killing all inside.

Yet each Vector costs £487,000, nearly twice as much as a Bushmaster. In other words, we are spending a great deal more money to give our men even less protection.

When our Armed Forces minister, Adam Ingram, was asked on October 18 by Mike Hancock, a Lib Dem MP, what risk assessments had been carried out on the Vector, he would only reply condescendingly that "we do not comment on the details of our vehicles' protection levels".

The Tory spokesman Gerald Howarth, on the other hand, far from recognising the shortcomings of the Pinzgauer, is pictured giving it a glowing testimonial on the makers' website.

Why is this national scandal not on the front page of every newspaper in the land?

More to the point, what were the MPs doing about it? Well, as we know, the Defence Committee eventually got round to asking about the Vector, last year. But there was no mention of the "crucial design flaw". However, in his defence, the committee chairman, James Arbuthnot tells us this:

Nobody had told us as a committee - or so far as I know as individuals - that there were any problems with the Vector, even though we had been going to Iraq and Afghanistan on regular visits and asking about the kit and whether there were any problems. Therefore we had nothing to prompt us to pursue it as an issue.

As for having a proper inquiry about mine protected vehicles, well says Arbuthnot, "We are at the moment choc-a-bloc with inquiries". The sub-text is, of course, that his committee of important MPs is far too er … important to look at unimportant things like saving soldiers' lives. And, in any case, nobody told them nuffink.

They are, needless to say, far too grand to read blogs which might tell them something that they didn't know. Gerald Howarth, for instance, tells us his diary is far to full to allow him the time to read blogs … although we know he is very familiar with Conservative Home, but then that is a political site, whereas we don't do politics.

But, if the Defence Committee owes us an explanation, there are the cohorts of Labour MPs who are equally useless, a subject further explored in today's Sunday Times. In the Atticus column, headed: "The devil may make some work for idle MPs to do", we read:

You'd think MPs would have a lot on their plates at the moment (fine china plates, let's not forget, available on expenses from John Lewis). The government is trying to wrestle the economy to the ground, we're still fighting wars in Iraq and Afghanistan, and Harriet Harman is absolutely not positioning herself for a crack at the Labour leadership.

But according to Tory Nadine Dorries, MPs are bored and don't have enough to do. "We have a bit of a problem here in Westminster," she says. "The business is sterile – that makes for lots of bored MPs."

She blames the prime minister for avoiding issues that might be controversial or would draw attention to government incompetence (which, let's face it, is pretty much everything).

But is that wise, Gordon? "Experience shows that bored Labour MPs are like naughty little schoolboys. And irritable, naughty little boys tend to look around for stones to throw, things to break and new friends to play with."

Now look at this, a debate initiated by Ann Winterton, on the design of military vehicles. Ann was there. The minister was there – because he had to be. And how many "bored" MPs were there, from either party? We can certainly reliably inform you that Nadine Dorries was not.

Interestingly, my piece on parliament as a failed institution did not exactly set the world alight. Too few people actually understand the nature of the problem, but of the political claque, many like it the way it is. It is much easier to report and enjoy the soap opera than get stuck in with hard-edged, detailed scrutiny, which actually requires some research and a great deal of effort.

Thus we turn to another bit of the "little picture", with this in the letter column of The Sunday Telegraph today, from Timothy Stroud of Salisbury in Wiltshire. He writes under the heading, "No laughing matter":

David Cameron warned last week that a full-scale depression is on the cards, marking some sort of turning point for the Tories. They would improve their respectability still further if, when we look at BBC Parliament to watch debates, we did not regularly witness giggling on the Tory front bench as they pull faces at the Government.

Some shadow cabinet members seem to believe they are starring in a live comedy show, judging by the way they act in parliamentary debates. The Tories won't find things so funny if they win the next election and have to face up to the grim realities of three million unemployed or the sad fact that the shadow Treasury team appears out of its depth.

This is not the first time this has been noted and we have made the same point. They giggle while our troops die, because they, like their fellow travellers on the opposite benches, are too idle to do their jobs.

And that, folks, is real politics – which is why nobody is interested. Now, if you will excuse me, I have some work to do.