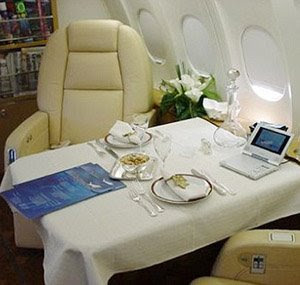 As a child being taught history – in the days when they did such things – the French Revolution always seemed unutterably cruel. It was so hard to fathom why those horrible people arrested those nice, kind aristocrats and killed them in such a horrible manner on the guillotine.

On the other hand, readers will recall how our beneficent, kindly heir to the throne was recently regaling us from far distant Chile with the importance of global warming, sternly telling us that it must be tackled before global poverty.

Interestingly, this stern injunction is somewhat at odds with the Prince's own lifestyle, illustrated above. This is the interior of the private jet in which he and his entourage flew to Chile, an aircraft which boast a satellite phone, printer, fax and laptop sockets and "luxury VIP leather seats" with personal DVD players.

According to the Daily Mail, the cost of the trip is expected to exceed £300,000 and produce over 322 tons of carbon. God knows how many poverty stricken peasants that would have fed but, with our kindly Prince on the case, the obvious answer for them is, "Let them eat carbon".

However, at least Charles has solved one problem. He thinks we have reached a defining moment. We have. We can now easily understand why the Frenchies topped their aristos.