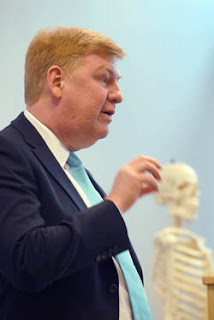 The hubris of the media is always a little entertaining, not least when one newspaper breathlessly claims an "exclusive", only for another to run exactly the same story.

Both are "revealing" that the Government's "top doctor" is recommending price hikes for alcohol, although why they have to use this infantile description is beyond me. He is Professor Sir Liam Donaldson, the "chief medical officer" – is that so hard to understand? That actually means he isn't a doctor. He is a medical bureaucrat, but what the heck.

Anyhow, neither of the newspapers pick up the EU link so well described in The Times the other day. But then, to have done so would have spoiled the headlines, and we can't have that.

That they should even propose this, however, points to the head-in-sand attitude of our own authorities who themselves do not seem to be able to come to terms with the fact that our superior government is in Brussels and that their freedom of action is heavily circumscribed.

There is, of course, the other possibility – that we have a strong element of kite-flying here, softening up public opinion for a massive tax hike on booze. That is the only legal option available to our provincial government. But, as we asserted in our previous piece, Mr Brown needs the money and if he can cloak another tax grab in the cosy garb of a "public health measure", he will be only too happy to avail himself of the opportunity.

The one thing we won't get is a sensible or even adult discussion in the media. There is plenty of evidence, from Sweden and other high-tax countries, that high cost does not affect consumption rates – although if booze does get too expensive, the kids turn to drugs.

Alcohol misuse is a symptom of a broader malaise and if Donaldson was a proper doctor and not a bureaucrat, he would know that treating the symptoms rather than the underlying cause of an ailment is rarely successful. But then, when it comes to "cures" which end up costing us all money, it really is quite remarkable how quickly medical principles are ditched.

It will, nevertheless, be marginally interesting to observe how the current players square their enthusiasms for price-hikes with the limitations imposed by EU law. Watch for some delicious squirming, and then an announcement that "taxation is the better option". You know it makes sense that you should give more of your money to the government.