The greatest lie ever told 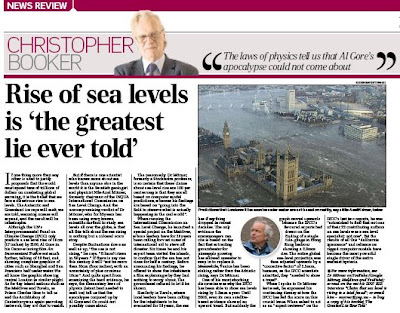 I had planned to do this earlier yesterday, but had software problems that needed fixing. I could, of course, have used the laptop – if I had one. But that got nicked last week in yet another burglary we have had to suffer. At least we are not alone. Victim support told me they have never been so busy. Since the recession started, burglaries have increased massively.

Anyhow, the theme is the Booker column and the climate change scam, in particular the myth of rising sea levels which we now discover is "the greatest lie ever told".

Booker's source is Swedish geologist and physicist Nils-Axel Mörner, formerly chairman of the INQUA International Commission on Sea Level Change. His uncompromising verdict, who for 35 years has been using every known scientific method to study sea levels all over the globe, is that all this talk about the sea rising is nothing but a colossal scare story.

"The sea is not rising," he says. "It hasn't risen in 50 years." If there is any rise this century it will "not be more than 10cm (four inches), with an uncertainty of plus or minus 10cm".

What is especially fascinating is that, when running the International Commission on Sea Level Change, Mörner launched a special project on the Maldives, whose leaders have for 20 years been calling for vast sums of international aid to stave off disaster.

Six times he and his expert team visited the islands, to confirm that the sea has not risen for half a century. Before announcing his findings, he offered to show the inhabitants a film explaining why they had nothing to worry about. The government refused to let it be shown.

It helps here to realised that the government at the time – and until very recently – was a dictatorship run by a very unsavoury character called Maumoon Gayyoom. He had been relying on a steady flow of international aid to prop up a bankrupt administration, and had interesting ways of administering the funding.

Although the government is now elected, with the Maldivian Democratic Party (MDP) now in power, the island remains troubled, and it is only through the continued flow of aid that it is making ends meet.

Now enter the EU which has promised a substantial aid programme, with €10 million on offer plus assistance in attracting World Bank loans and further largesse from the UN Development Programme.

But it soon becomes clear that the money has strings attached, aid being conditional on the island espousing "the cause". Thus we find that the Maldives "believes that global environmental issues, such as global warming and rising sea levels, require global solutions, and seeks genuine commitment and positive action from the international community to protect environmentally vulnerable States."

As long as the government remains a "believer", the EU has promised it will the Maldives "to strengthen its voice in international fora on climate change and in its bilateral campaigns to seek the support of powerful organisations and nations that can help it fight for survival."

At national level, the EU is also offering to support the government "in its established policy to develop safer and more sustainable islands for the population."

Upon the myth of rising sea levels, therefore, does the Maldives government depend for its international status and to keep the gravy train rolling. There is no way of can afford not to go along with the EU and lend its "voice" in international for a on climate change.

Booker, in his column, notes that, if one thing more than any other is used to justify proposals that the world must spend tens of trillions of dollars on combating global warming, it is the belief that we face a disastrous rise in sea levels.

To that effect, the climate hysterics have recruited the government of the Maldives, and indeed the leaders of Tuvalu – another of the supposedly threatened Pacific islands - where the sea has if anything dropped in recent decades. By lining their pockets with gold has the "international community" kept the island leaders "on-side" willing to promote the myth which sustains the whole scam.

Thus survives "the greatest lie ever told", built, as Booker tells us, on "deliberate ignorance" and rigged computer models – and bribes to compliant governments which thus have a vested interest in seeing the scare prosper.

And they call this science!