Lord Dykes and Lord Malloch-Brown show their ability to debate 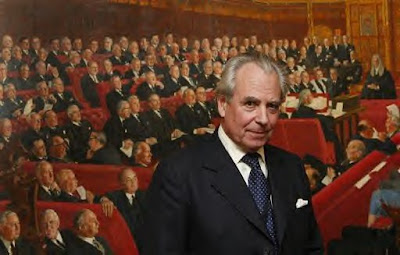 One of the most extraordinary aspects of the europhiliac case is that, apparently, it is watertight. There can be no rational arguments against Britain's membership of the European Union or, indeed, further integration of said body.

Yet, as soon as there is a debate, all we get is vicious personal abuse. Take Lord Dykes, for instance. (Well, OK, I'll take Lord Dykes.) For some reason the man, whose career prior to his entry to the Upper House has been unimpressive, to put it mildly, felt a great urge to intervene in the short debate that followed Lord Pearson of Rannoch’s Starred Question yesterday afternoon.

It was not a particularly complicated question. Lord Malloch-Brown, former SecGen Annan’s bag carrier, should have coped with it.

To ask Her Majesty's Government what is their response to the analysis in The Great European Rip-off, published by the TaxPayers' Alliance, which maintains that United Kingdom membership of the European Union incurs an equivalent cost for each United Kingdom citizen of £2,000 per annum.

Sadly, this seemed too difficult for his lordship and he blathered about the benefits far outweighing the costs, which is, presumably, why HMG has never dared to do a cost/benefit analysis.

The figure of £2,000 cited by the TaxPayers’ Alliance seems to be largely based on estimates of the costs to the UK economy of regulation at the EU level, but that is not even half the story. Single market regulation has opened markets across Europe, and 3.5 million British jobs are linked to exports to the EU—and the benefits go still wider. The security of UK citizens is enhanced by co-operation with EU partners on terrorism, illegal migration and organised crime.

Yawn and double yawn. Those single market regulations may or may not have opened markets across Europe but they also apply to the vast majority of British business who do not trade with other European countries. And that market could have been opened by mere trade agreements.

As for those jobs – oh dear, could anyone with a spark of intelligence really use that argument any more? No, Lord Malloch-Brown, the jobs will not disappear if we are out of the EU because we shall go on trading with other EU countries, if that is what we want to do or we shall trade with other countries, which might be more advantageous. Duh!

And I sincerely hope that we co-operate with non-EU countries on terrorism, illegal migration and organised crime, not that the EU structures, which is what that body is interested in, have been particularly useful on, say, illegal migration.

After a bit of toing and froing about whether those figures by the Taxpayers' Alliance are exaggerated or not (and it is hard to tell as HMG will not produce a study of its own) we get Lord Dykes's notable contribution:

My Lords, does the Minister agree that he does not need to congratulate the noble Lord, Lord Pearson? He should be sympathetic because, having wrecked the Conservative Party, Stuart Wheeler is now moving his money to the UKIP. But it does not need it anyway because all the UKIP MEPs charge maximum expenses on a regular basis in Strasbourg and Brussels, which adds up to about £400,000 per Member.

I turn to the TaxPayers' Alliance. Does not its innocent-sounding title hide a rather sinister truth? Five years old now, it was formed by three or four dotty, extreme right-wing Conservatives who make the neo-cons in America look very moderate—Minford, Minogue and all the rest of them—and is now advocating deep hatred on a day-by-day basis; as Polly Toynbee said in the Guardian on 9 February, "insidious poison". Will the Minister treat this report with the contempt it deserves?

Well, if Polly Toynbee, that great sage of political thought, has said so, we may as well all pack up. I had better remove my copies of Plato's, Hobbes's, Locke's John Stuart Mill's, Edmund Burke's and assorted others' works and start collecting la Toynbee's efforts. What more can one need in life?

Setting aside the fact that Lord Dykes, in common with most British politicians and journalists has not the faintest idea of who the neo-cons are (they are not simply more conservative than the others) let us look at the rest of that spectacularly nasty outburst.

"Minford, Minogue and all the rest of them", presumably, refers to the highly regarded economist Professor Patrick Minford and the leading political philosopher (sans blague), Professor Kenneth Minogue. Remind me again, what has Lord Dykes achieved in his life?

One wonders why producing information about the amount of taxpayers' money that is wasted and mis-spent by our bloated officialdom is to be described as "advocating deep hatred on a day-by-day basis". This tells you something very interesting about the mentality of Lord Dykes, Polly Toynbee and the rest of that gang.