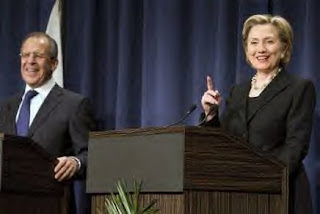 We seem to have a Secretary of State who is incapable of getting anything right as I do not consider being praised by Hans-Gert Pöttering for sounding "European", which does not mean that she sounded like somebody from a European country, getting it right. Incidentally, though the boss thinks that "this stuff is beyond fisking", I intend to write a bit more later on about Hillary's trip to the European Union.

In the meantime, Glenn Reynolds rounds up several references to a completely cuckoo decision on what sort of a gift to take to the Russian Foreign Minister, Sergei Lavrov. It would appear that Madame Secretary of State gave Mr Lavrov

a present meant to symbolize the Obama administration's vow to "press the reset button" on US-Russia relations.

She handed a palm-sized box wrapped with a bow. Lavrov opened it andpulled out the gift: a red button on a black base with a Russian word peregruzka printed on top.

Oh help! This from an Administration that boasted of being more knowledgeable and professional in its dealings with the rest of the world.

In the first place, as others have pointed out, giving the Russians a button to push does not exactly send the right signal. Here, why don't you press this red button and see what happens. We might talk later on but, then again, this might just be IT.

Secondly, as Mr Lavrov explained in some bemusement, that is the wrong word. Перегрузка does not mean reset. It means overload. Is there nobody in the State Department who knows elementary Russian? Or did they do this on purpose to embarrass the Secretary of State? (After all, somebody must have told her that American democracy, which is, in fact, the wrong expression as the country is a constitutional republic, is older than European, whatever that might mean.)

And to think we complained about Condoleezza Rice! Well, that just goes to show. It can always get worse.