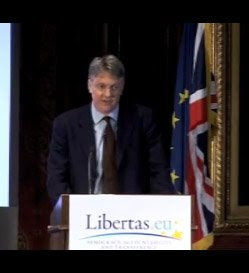 Having expressed a certain lack of enthusiasm for the great Declan Ganley, I did go with interest to the launch of the Libertas's electoral campaign in the UK.

The press conference was not as well attended as I would have expected. When Kilroy Silk launched Veritas in 2005, there was barely standing room in the big hall in One Great George Street and the main media had sent their big guns.

This launch was thinly attended though I gather from Mark Mardell's blog on the BBC site that he was there or, at least, he had spoken to the leader of the campaign, Robin Matthews, described as a former British soldier. Actually, that may have been the previous day as the blog was posted at 10.30 am, the start of the press conference.

A "former British Soldier" is a remarkably coy way of describing a 21-year army career and Mr Matthews was no more forthcoming during the press conference, saying merely that he had served in Bosnia, Sierra Leone and Afghanistan. Mr Ganley also added in ringing tones (he is good at ringing tones) how ironic it was that Mr Matthews has travelled round the world as a British soldier "championing the values of democracy" only to find them being eroded at home.

Yes, that is ironic, all right and one is glad that Mr Matthews has understood this but one is not too sure that he knows quite what to do with that understanding.

The rest of this long and long-delayed analysis of Libertas UK and its launch is over on Eureferendum2. Enjoy.