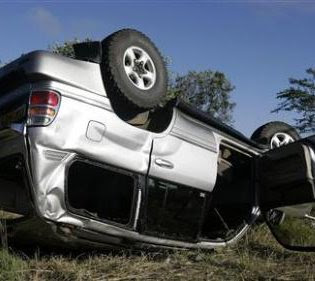 There is a curious detail buried in the horrific but not altogether surprising story of the car crash that killed Zimbabwean Prime Minister Morgan Tsvangirai's wife and put him in hospital where he was visited by President Mugabe. I hope they checked all the food and every medical tool afterwards.

The MDC is, understandably in view of the large number of Mugabe's opponents who have died in car accidents, demanding an independent inquiry. Maybe the UN can oblige or that well-known supporter of democracy and human rights, the European Union.

However, what caught my attention was the description of the truck that ploughed into the Prime Minister's car, which for some unknown reason had no protection at all:

Police on Friday said Tsvangirai's car collided with a truck which crossed into the oncoming lane and side-swiped the prime minister's vehicle, causing it to roll several times.

ABC News in the United States cited unnamed US officials as saying the truck belonged to a contractor working for the US and British governments.

The truck, which had a USAID insignia on it, was purchased by US government funds and its driver was hired by a British development agency, the report said. USAID stands for the US Agency for International Development.

One would certainly like to know a bit more about that.