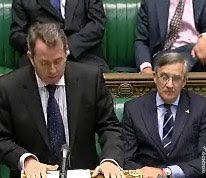 Defence questions yesterday brought up a rash of questions on the A400M, but first in the offing was a question on the "air bridge" – the RAF shuttle service between the UK and the operational theatres. That brought an intervention from Conservative shadow defence secretary which had him walking into a bear trap, eyes wide closed.

Launching into the attack, the egregious Fox demanded that defence secretary John Hutton admit that the main reason for the constant delays experienced in the service was "simply that the TriStars we are using are clapped out, with only 44 percent of the fleet fit for purpose".

Actually, that is not the problem. In terms of airframe hours – by which aircraft age is measured – the TriStars are relatively youthful machines. But we shall let that pass as this was but a launch pad for Fox's substantive attack. Directing all his guns at Hutton, he thus charged:

The future strategic tanker aircraft, which is the replacement aircraft for both troop transport and the re-fuelling tanker, was supposed to be in service in 2007 initially: we are now told that it will be at least 2011. On top of the Nimrod delay of 92 months, the Astute submarine delay of 47 months and the Type 45 destroyer delay of 42 months, is not defence procurement another fine mess Labour has got us into?

Hutton – no fool he, with something of a reputation as a military historian – evidently knew his recent defence history better than the shadow secretary. "No," he said, "and the hon. Gentleman should be very careful citing those examples, because those were all contracts let by the former Government. They were not let on proper terms, and that is especially true for the Astute contract - and he should know that."

Unabashed – or perhaps not hearing the answer – Fox launched his next salvo, demanding: "Is not the prevarication that we have seen exactly what we are now seeing with the A400M military transport fiasco? If that project is cancelled, and we are the last to pull out, we may be at the end of the queue to buy the necessary alternative capabilities - losers yet again."

The last point is well made. If we leave it too late, then indeed we are at risk of being at the end of the queue, as other buyers – in a worse state than us – rush to sign up with Lockheed for replacements, leaving the RAF stranded with its ageing fleet of C-130Ks.

Hutton tells us that the MoD will make a decision on the A400M in July, but you can bet that, behind the scenes, frantic negotiations are taking place to overcome what Fox calls the "A400M military transport fiasco".

Here again, though, Fox's triumphalism might be a tad misplaced. Although the A400M was ordered on the Labour watch, the project gestation stretches back into the mists of time – placing its genesis very firmly with the previous Conservative administration. In fact, after years of the very "prevarication" of which Fox complains, where the then government had been blowing hot and cold for some many years, on 16 December 1994 the UK rejoined what was then known as the Future Large Aircraft project.

This was announced by the then defence secretary Malcolm Rifkind, lodging the UK firmly in the programme. Thus, when Tony Blair in May 2000 finally agreed to order 25 A400Ms, he was merely setting the seal on a process initiated by the Conservatives those six years earlier.

Hutton could perhaps have reminded Fox of this, but – presumably – chose not to. But the fact remains that neither Labour nor the Conservatives have clean hands on this project and, if it had not been John Major's enthusiasm for remaining at "the heart of Europe", we probably would not be in this current mess which even has the New York Times scratching its head in amazement.