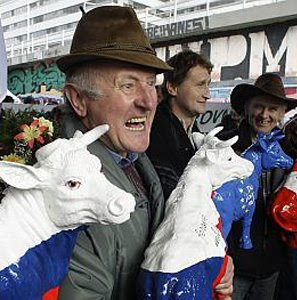 Last year, it was Germany and now it is the Czech Republic.

Almost a permanent feature of the EU's CAP, last week saw dairy farmers out in the streets of Prague, complaining about falling milk prices, their protests timed to coincide with a meeting of the Agriculture council, at which commissioner Marianne Fischer-Boel was also present.

This serves to remind us that – even if farming matters rarely find their way into the media these days, the CAP still exists and still has the capability to mess us farmers to the point where they take to the streets.

Slovakian farmers are also angry, having to deal with prices that have dropped by 40 percent compared with last year, currently covering less than 60 percent of production costs. They reckon to have lost more than €20 million in just the first two months of 2009.

Here though, we can rejoice in the experience of agriculture minister Stanislav Becík. Local measures have been taken but are largely ineffectual and he is now calling on Brussels to take measures to improve what he called "the alarming situation in the dairy market." Farmers agree that measures need to be taken at a European level.

The big problem is that since 2008, the EU has increased production quotas for milk, which has triggered overproduction and the catastrophic fall in prices. As a result, the EU is already reverting to its traditional measures of export refunds and private storage aid for butter, and is now buying butter and milk powder into intervention.

It is in a way comforting to know that some things never change, like farmers complaining that the EU is driving them into bankruptcy and demanding more aid. It sort of makes you feel all nostalgic. Butter mountains here we come!