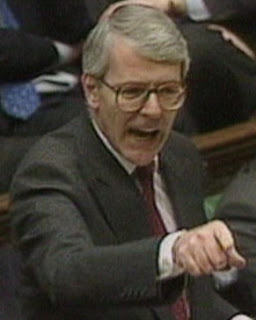 … of a devalued government

So said the man, to very great applause from his own side, as he rounded on a man who had brought the UK to the brink of ruin. But this was not Daniel Hannan speaking. It was John Smith, in September 1992, savaging John Major after his abrupt withdrawal from the ERM. Before his peroration, Smith had told Major:

Britain had been relegated to the second division of Europe because the Government had for years followed policies which had thrown the economy into a deep and damaging recession. Then, faced with a crisis, the Government's chaotic mismanagement and sheer incompetence had forced it to abandon all it stood for in a matter of a few hours.

The same debate saw a "similarly aggressive performance", from shadow chancellor Gordon Brown. He said the party that had run a general election campaign on the slogan "You can't trust Labour" had shown itself to be completely unworthy of trust. "They may hold office for five years," said Brown, "but after five months they have lost all authority to govern. They have failed the country and they will never be trusted again."

Warming to his theme, Brown said there would always be a "credibility premium" to be paid either in interest rates or elsewhere as long as Mr Major was Prime Minister and Mr Lamont was his Chancellor. Winding up the debate, he then predicted the removal vans would soon be arriving at the chancellor's residence.

That much of the prediction was right, but it was nearly five years before the removal vans arrived at No. 10 to cart away the possessions of the "devalued Prime Minister". But, while 17 years later, we have another "devalued Prime Minister", and this one only has a year left before he faces election. But then, history never repeats itself … even if Mr Hannan, with delicious irony, repeats the lines of a Labour leader back at a Labour leader.

But, even if he used another man's words to do it, Hannan's speech has been an extraordinary event. He thus has a point when he observes that political reporters no longer get to decide what's news. The days when a minister gave briefings to a dozen lobby correspondents and thereby dictated the next day's headlines, are over, he says. Now, a thousand bloggers decide for themselves what is interesting.