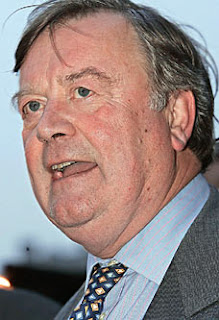 "We should stop talking to ourselves about Europe and start talking to the electorate about the things that matter to them."

That was Ken Clarke speaking in June 2001, on the occasion of his announcing his bid for the leadership of the Conservative Party.

If he didn't gain the crown – then or later – he at least got his way on that, with the Boy sticking firmly to his prescription, telling the faithful to stop "banging on" about Europe.

But now that the Boy is "banging on" about Europe or, at least, a referendum about the treaty-to-be, the Master has stirred from his lair to tell him to desist.

He is joined by arch-Europhile, former foreign secretary Lord Hurd, both of whom are saying that the stance makes it harder for the Tories to show the public that they have changed.

Clarke believes that the demand for a referendum has "an inner absurdity", arguing: "One thing that will make a Conservative Party electable... will be if we continue to dilute this absurd, extreme eurosceptism that swept over the party in the last 10 years."

Hurd's view is that referendums should be reserved for only "the most extraordinary earthquakes which are proposed", declaring that, "I don't think there's anything in this treaty in so far as we can see it now which actually justifies that."

With Clarke having famously boasted that he had not read the Maastricht Treaty, one wonders whether either of them have actually read the "mandate".