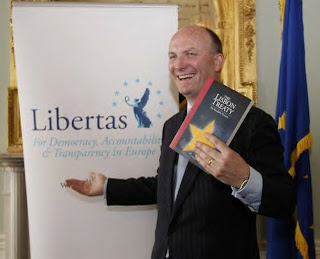 It takes a really arrogant man to describe himself as being naive, adding immediately that being naive, if you are also ambitious, may not be the worst thing. Sometimes you just have to take your lance, charge downhill and to hell with the consequences.

There was much more sub-military language in Declan Ganley's address to the Henry Jackson Society last Tuesday and in the subsequent discussion; much talk of holding the line, leaving the trenches, the Irish people ("not me, it was the people") being the advance guard that needs the support of the rest of the people of Europe. [And yes, I know, I should have written about it before but other matters intervened.]

In parenthesis it should be noted that as far as Declan Ganley is concerned there is no difference between the EU and Europe and democracy means asking the people of Europe, whatever that might be, though he did acknowledge that there is no pan-European politics as yet. I shall return to this extraordinary muddle in thinking.

Several minutes went on a fiery announcement that he, Declan Ganley, was prepared to make any sacrifice to achieve his aim of restoring [sic] democracy to the European project. There is nothing more "they" can do to him. In fact, "they" have not done much to him anyway, except for calling him names. Big deal! Some of us have had to put with that for some time, on occasion losing jobs for not toeing the line. Hardly great sacrifices, particularly as some of the shocking names he was called were "eurosceptic" and "anti-European". As risk and sacrifice go, facing up to those words does not come very high on my list.

Of course, said Mr Ganley, almost succeeding in looking modest, other people have made far greater sacrifices for democracy. Nevertheless, he managed to draw an implicit parallel between himself and an (unnamed) commander of the Continental Army at Yorktown (not, I presume, Washington) who ordered a devastating artillery fire at his own home, suspecting that General Cornwallis had made it his headquarters.

What there was a shortage of in the talk and subsequent discussion is coherence in Libertas's stance. Just what is it Mr Ganley (oops, sorry he did say call him Declan because Mr Ganley is his father) wants to achieve? I managed to ask two questions, introducing myself as being from EUReferendum, clearly an unfamiliar name to Mr Ganley Declan. Congratulating him on his readiness to make any sacrifice for the cause I wondered whether it might not be wasted.

Even if the Lisbon Treaty fails and even if Libertas gains a large number of seats in the Toy European Parliament, almost all that he dislikes about the EU - lack of accountability, European legislation trumping national, European citizenship - would still be in place. Indeed, they are integral parts of the European project, which Mr Ganley Declan, according to his own repeated comments, supports.

Is he suggesting that the Consolidated Treaties should be torn up and a completely new structure created?

No, of course, not. Mr Ganley Declan is not, he assured us, a revolutionary (though he is ambitious and ready to take risks). The revolutionaries are those who sit in Brussels and create a system that takes power away from the people.

Though that statement had the air of being thought of at the last minute, it is closer to the truth than Mr Ganley Declan suspects - the European project is a revolutionary one. The problem is that it is more coherent than Libertas who seems to have no other spokespersons, gives it credit. To say, as Mr Ganley Declan did, that the problem is the Lisbon Treaty and there is no need for it because we still have the Nice Treaty and then to talk about the need for democracy is to exhibit a terrifying lack of knowledge.

I did not bother to ask him what he was going to do about it in the Toy European Parliament because it was quite clear that he saw himself as considerably more savvy and knowledgeable about the EU (despite all evidence to the contrary). In fact, I was waiting for him to tell me not to bother my little head about it because he will ensure that my voice will be heard.

Very well, said I, suppose the people of Britain are asked and vote against the idea; but suppose across Europe the people of it vote in favour; we shall get a European President whether we like it or not. I am sorry to say that Mr Ganley Declan did not answer the question, possibly because he was too busy assuring everyone that he was not a withdrawalist, not a revolutionary and not a eurosceptic. In fact, he wanted to save the European project because if it carries on the way it is going, there will be serious calls in many countries for withdrawal and that would be a tragedy.

This was one of the themes of his talk. The European project, in his opinion has come a long way and must not be undermined by those in Brussels who want to put an anti-democratic spin on it; who are shocked by the fact that people, who ought to be the owners of this project, do not want to march in lockstep with them. If they are allowed to go their own way, the withdrawalists will become strong and the project will disintegrate.

The problem with that is, as all our readers will instantly realize, that the project never had a democratic aspect to it. Clearly Mr Ganley Declan has never read a certain book that the boss and his colleague, Christopher Booker, wrote, in which they clearly explain the anti-democratic nature of the project from the very beginning.

Now, this would not matter if one said openly that democracy is a so-so idea, a recent and not very successful experiment and, maybe, it is best to move on. But that is not what Mr Ganley Declan is saying. He sees himself as the man whose appointed role it is to restore democracy to "Europe" or the European project.

We do not need the Lisbon Treaty, which has all those undemocratic and even anti-democratic ideas in it; we already have the Nice Treaty and can go back to it. Presumably, he has not read the Nice Treaty either and has forgotten that the Irish voters tried rejecting it once but were bullied and cheated into voting it through. Hardly the behaviour of a democracy. No wonder he did not answer my question about the European President.

Furthermore, Mr Ganley Declan keeps talking about the people of Europe and the need for them to have their democratic rights restored and to speak up about the way these are being stolen from them. Those who are doing the stealing, we were told several times, are using the well-tried method of "divide and conquer". They ask the people of individual member states and discard those results if they are not the ones the eurocrats want to hear. Now, if only the people of Europe united and stood up to these dastardly tactics …

Well, what? It seems Mr Ganley Declan does not understand exactly what he is saying. At best he believes in a perestroika: if we change things a little bit here and there the whole project will miraculously become what we always wanted it to be. Except that it was not clear to me or to a number of people in the audience what the aim of the exercise is – just what is it Mr Ganley Declan wants to achieve beyond getting a group of like-minded and woolly-minded individuals into the Toy European Parliament.

He was also very coy about his plans in the UK and one cannot help feeling that he is leaving the putting together of his pan-European list of candidates (the only one, as he proudly explained) very late. Those elections are in June.