Although we've done a number of postings on military matters recently, we make no apologies for referring again to the current operation, code-named "Silicon", underway in Helmand province, continuing as we lie safely in our beds (this post written just before midnight yesterday).

We've also been able to swipe some early pictures from the Yahoo website, the top picture showing British soldiers of the first battalion, Royal Anglian Regiment, known as The Vikings, sitting in their military vehicle as they provide security for "Silicon", east of the town of Gereshk.

The picture is of some interest as, in addition to the Viking APC (left of frame - retained from the Royal Marines), we also see a Pinzgauer Vector to the right of frame. This is the first photograph I have seen of this vehicle actually deployed. The "coffins on wheels" have arrived.

The operation itself is of crucial importance for many reasons. At a strategic level, it shows Nato troops taking the initiative, just at a time when the Taliban "spring offensive" was expected, demonstrating that the war is being taken to the enemy on our terms, rather than waiting for the Taliban to make their moves.

Secondly, it shows the British public that the investment (both emotional and financial) in our troops is paying dividends. We need to see that our taxes do not simply deliver dead soldiers in body bags, but offer the prospect of peace and stability in a corner of Afghanistan where the writ of law has rarely run. Like our soldiers and the Afghani population, we need to see results. 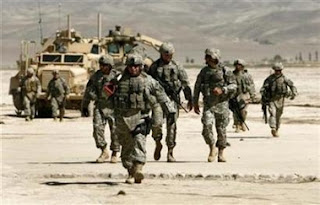 The second photograph has nothing to do with operation Silicon. It was actually taken on 23 April and shows US soldiers south of Ghazni, in southeastern Afghanistan. But it also shows in the background one, or possibly two, Cougar armoured vehicles – this only the second time I have seen a photograph of them deployed in this theatre.

But what is especially interesting is that the vehicle(s) seem to be used more like conventional armoured fighting vehicles, supporting dismounts, than in the classic patrol role. This may be a lesson for our own troops, when or if they are supplied with this equipment. Just because they have wheels and look like trucks does not mean that they can only be used as "battle busses".

Anyhow, all the world loves a success. Sentiment in the UK and elsewhere has been, at best, lukewarm about our venture in Afghanistan. With more of the "Silicon" type operations, perhaps there will be more, even if grudging, support for what Nato and our own forces within it are trying to achieve.