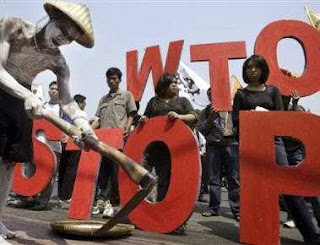 There is general agreement that the Doha round of the WTO talks has collapsed, to no great surprise and, no doubt, to the delight of Sarkozy and the other protectionist tendencies which are happy to see the process of "globalisation" brought to a halt.

The proximate cause is a dispute principally between the US and India - which also included Indonesia and China - over a safeguard mechanism to protect farmers in developing states from agricultural imports.

There are, however, deeper causes and much will be written in specialist magazines and in learned papers over the coming months and years about the these. For the moment, no one is particularly interested in playing the blame game.

Certainly, the US has left its offer "on the table" and the game remains to be played. It is unlikely though, that there will be any progress this side of the US election or, for that matter, until there has been an Indian general election.

In that senses, therefore, the collapse of the talks is just another hiatus in a process that has already taken seven years and which can be resuscitated once the global players decide to have another go.

This notwithstanding, that lack of any progress is raising serious questions about the viability of the WTO, articulated by the Irish Times. What may now happen is that the system disintegrates, to be replaced by a series of bi- and multilateral agreements outside the WTO framework.

Interestingly, that was suggested on the BBC Radio 4 report this evening, the BBC having led its new bulletins all evening on the collapse of the talks. That in itself says something about the level of interest, the collapse having attracted far more attention than the progress of the talks.

On the domestic political front, there has also been little interest. Apart from a ritual statement from Gordon Brown six days ago, there has been little reference to the talks, and almost no comment from the Conservatives. The issue has been all but completely delegated to the EU and thus depoliticised.

Despite that, the repercussions will be felt politically. As The Daily Telegraph remarks, "the failure of the talks is economically disastrous and could be politically destabilising." A deal, it says, could have been worth several hundred billion dollars in increased global activity, a fillip that national economies could use now. "Even more worrying," it adds, "when nations fail to cooperate on trade, it makes conflict more likely."

That, unfortunately, is the truth but it is not one that will impinge directly on our political system. The impact will be felt more directly by the developing world, in continued poverty, instability and, indeed, conflict.

But, for the moment, our political classes are more concerned with the domestic soap opera. Few, if any, will be asking what we as a nation could have done – if anything – to have brought the talks to a successful conclusion – and even fewer will link events to come with the failure.

Having ceded leadership in world trade, we have become impotent by-standers, so bereft of power and influence that we do not even notice its passing. That too is another casualty of the Doha round, the confirmation that the UK is no longer a serious player on the world stage. Now, where others lead, we simply follow.