The appeasement moves to Paris 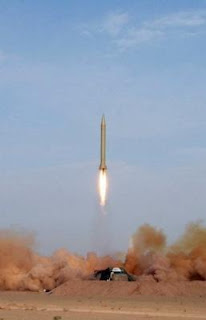 If the Iranians have any hope of breaking free from the corrupt, murderous regime that is currently destroying their country – without having to resort to the bloody turmoil of a protracted civil war – it will be though the efforts of the People's Mujahideen of Iran (PMOI). This is perhaps the one organisation which can engineer enough internal support to depose the mullahs and bring good governance to this troubled country.

On that basis only, it would have been logical to assume that the Western powers would be doing everything they could to support the PMOI and, through them, to exert leverage within Iran.

But, as we have recorded, taking our cue from the pages of the Booker column, far from supporting this organisation, Britain – with and through the EU – seems to be doing everything it can to frustrate the PMOI and, on the other hand, to appease the tyrants of Tehran.

Gradually, though, the media are waking up to the realisation that the latest round of Iranian bellicosity was nothing more than bluff. Even The Sunday Telegraph is retailing the story that the Shahab 3 missile was far from the "terror" weapon advertised, The Times is on the case, and Scrappleface is taking the only sensible line, treating the Iranian posturing with contempt.

Yet, as Booker reports, far from echoing that contempt for what is without doubt a failed state, the ongoing drama over the West's outlawing of the PMOI continues apace.

Last month, as readers will recall, the British Government was forced by the Lord Chief Justice and the Court of Appeal to remove the PMOI from its list of banned terrorist organisations, outlawed by Britain only in a bid to appease Tehran.

As a measure of the importance of this move to the mullahs – who regarded it as a serious defeat, since they used this proscription (which Britain persuaded the EU to copy) as evidence to the Iranian people that the West regarded their chief popular opposition as terrorists - Tehran has gone into overdrive to ensure that ban remains in place in the EU, where the PMOI is still banned.

Without Britain's overt support – it having been neutralised by the Court of Appeal - Tehran has since been focusing its efforts on the French government, which now holds the EU presidency. And, at a series of secret meetings involving the French foreign ministry and both countries' intelligence services, the mullahs have so far prevailed on the French government to maintain the EU's ban.

With the EU's "foreign minister", Javier Solana, due to meet senior Iranian officials in Geneva next Saturday, to grovel plead with Tehran yet again not to proceed with its nuclear weapons programme, it seems the EU is as bent on appeasement as ever. 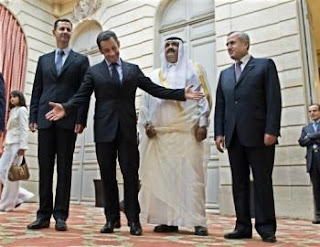 This, writes Booker, leaves our Government in an extraordinary position. Unless it can persuade the EU to change its mind, thanks to Britain's courts having explicitly ruled that the PMOI is not involved in terrorism, it is now in serious breach of EU law.

And this mess has all come about through a vain bid to appease a regime that, as our Foreign Office admits, has been responsible for killing British troops in Iraq and Afghanistan.

No for the first time, Booker then concludes by questioning the role of the rest of the media. "Isn't it time that this scandalous and humiliating farce was noticed in other parts of the media, and not just this column?" he asks.

And well indeed he might ask. With Sarkozy grandstanding over his half-baked idea for a Mediterranean Union (pictured above), it is time a little light was shed on these murky dealings, as the appeasement moves to Paris.
Posted by Richard at 14:25