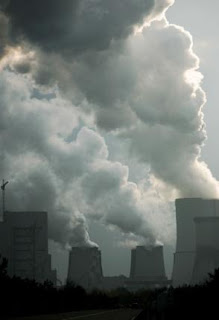 The House of Commons Environmental Audit Committee (EAC) has dropped us a little leaving present for the last day of parliament before, they and the rest of the MPs dashed off for their much-deserved 11-week break.

The committee (prop. Tim Yeo) told the government that it must set a deadline for coal-fired power stations to install technology massively to cut their emissions, or they must be shut down.

Lovingly recorded by The Independent, the committee also tells us that "urgent and ambitious" steps were needed to develop measures to capture and store underground the carbon produced by burning fossil fuels.

And, despite the fact that the technology is not commercially available – to say nothing of being hideously expensive – new coal-fired power stations should not be permitted unless they were "carbon capture ready" and undertook to fit the capture technology as soon as it was available, on pain of being shut down if they did not.

That the MPs on this committee can be so cavalier about the prospect of shutting down vital power stations, on the basis of the imagined harm they might do to the environment, readily demonstrates quite how detached from reality they are.

While one of the most pressing problems we face is the imminent shortage of generating capacity, only someone living in the land of the fairies could even begin to contemplate reducing our capacity still further – or hampering attempts to build new capacity.

Such is the land that these MPs live, however, so it is as well to remind ourselves that the obsession with the global warming is by no means confined to our legislators in the EU.

Mind you, it is probably no coincidence that Tim Yeo is also a rabid europhile, the love of the EU and climate change paranoia very often going together. But, that this man, as chairman of an influential committee, should be spouting such arrant nonsense definitely demonstrates that we have a serious problem – and it isn't global warming.

The picture of power station cooling towers, incidentally, is "uplifted" from The Independent - it is fascinating how the warmists so often show this type of picture to illustrate stories about carbon dioxide emissions. Do they not realise that their plumes are simply water vapour, or do they not care as long as they appear to make a point?