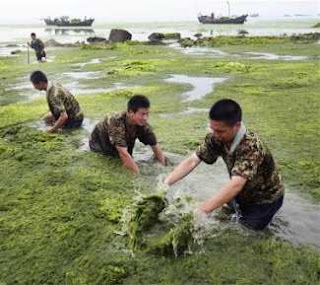 The BBC all but ignored the rioting in China’s Guizhou Province earlier this month – giving airtime instead to efforts to clear up the algal bloom in the sea off Qingdao – home of the water events for this year's Olympics.

Even then, it treated the issue on a superficial level, dealing with just the clear-up efforts without drawing any deeper inferences from the sudden appearance of the alga – an estimated 620,000 tons having been removed by yesterday.

Not so Peter Navarro in today's Asia Times, who offers a thoughtful comment piece headed, "China's pollution Olympics", in which he discusses the underlying causes of this menance.

Perspicaciously, he tells us, "Sometimes it's the little stories that tell us the most." Indeed it is. Very often, small clues carry huge meaning and can give an insight into a situation that all the blaring headlines fail to reveal.

The algal bloom, Navarro tells us, is "far from atypical in the world's most polluted nation." Today, he writes, fully 70 percent of China's seven major rivers are severely polluted, 80 percent of its rivers fail to meet standards for fishing, and 90 percent of the country's cities suffer from some degree of water pollution.

As a result, over 700 million Chinese drink foetid water of a quality well below World Health Organization standards. Meanwhile, liver and stomach cancers related to water pollution are among the leading causes of death in the countryside, while 21 cities along the Yellow River are characterised by the highest measurable levels of pollution.

As to the algal bloom in Qingdao, this is being caused in large part by equally massive misuse of fertiliser. As the world's largest fertiliser user, China consumes more than 50 million tons annually. Far too often, untrained peasants apply far too much fertiliser to their meagre plots in the false hopes of boosting yields. The result has been a new kind of "flooding" problem, that of excess fertiliser runoff flooding into rivers and streams.

Relentlessly, Navarro retails the extent of this problem. One case he describes is the algal blooms that keep hitting China's third-largest lake, Lake Tai. Famous for its classic beauty, the lake is more than a major tourist attraction. It also supplies water to 30 million people. Cleaning up of this lake alone is going to cost more than US$14 billion while panic buying of bottled water during Lake Tai's repeated algal blooms have driven the price of bottled water as high as $1.50 per litre.

Furthermore, China's algal blooms are hardly restricted to its rivers and lakes. China's coastal waters are also suffering mightily from a growing epidemic of "red tides" - an oceangoing version of eutrophication. The problem is particularly acute in the relatively shallow Bohai and Yellow Seas off northern China where Qingdao is located and where there is minimal tidal exchange.

These red tides are rapidly destroying fish stocks and devastating marine life for both the country and its neighbours while China has seen an astonishing 40-fold increase in the incidence of red tides in just the past few years.

And so to the "broader picture" from this little story. We have a "big country choking to death on a wide variety of pollutants." What is emerging is one of the most far-reaching and irresponsible environmental disasters the world has ever seen.

Obviously, in a single piece, there are limits to what Navarro can deal with so, inevitably, he is not able to address the economic issues. But poor water quality in particular has a massive effect, not least on agriculture. The burden of pollution is steadily excluding huge volumes of water which are desperately needed in country which is not over-blessed with this resource.

This is already having a significant effect on production and is one of the factors which is bringing China's economic expansion to a grinding halt.

The bizarre thing about this is that these problems are being caused by real pollution, which is having an immediate and serious impact. Yet, as Booker reports, the G8 emphasis is on that entirely fictitious "pollution", namely "carbon" or, more accurately, carbon dioxide.

One of the great distortions of the global warmists is turning a vital chemical like carbon dioxide into "pollution". But, in so doing, they divert attention from real, and seriously harmful threats, which will have repercussions far beyond the regions they affect. A hungry, impoverished and unstable China is protentially a far more serious problem then any imagined harm from "global warming", especially as the last eleven years have seen gradual cooling.

In the final analysis, therefore, the harm done by the warmists will not only be measured in terms of the direct damage they have done. In diverting attention and resources from real problems, there are massive opportunity costs – the costs of things not done while our politicians fritter away our wealth on a miasma.