Shot down by the EU 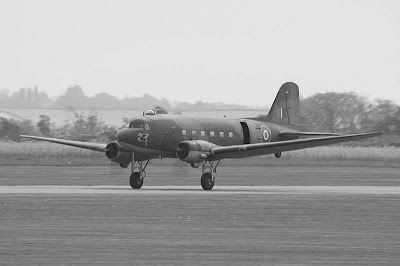 As Bloomberg tartly remarks (one of only two media outlets to cover the event), Britain's Douglas DC-3 aircraft survived World War II and the Berlin Airlift. They won't survive the European Union.

The rules are patently absurd for vintage aircraft, the Dakota in particular which only flies in clear weather, at altitudes low enough to breathe, and with exits about four feet off the ground. Nevertheless, the "one size fits all" mentality of the loathsome "colleagues" has reached out to swat down a cherished piece of our aviation heritage, taking out the UK's last three DC-3s.

"It's bureaucracy gone mad," said Trevor Cherrington, 49, a civil servant who paid £90 for one of the aircraft's last excursions. "If they've been flying this many years, how have they suddenly become dangerous?"

The story was picked up by Christopher Booker in his column that month, following which Tory defence spokesman Gerard Howarth intervened, with a pledge to get this insane piece of nannying reversed.

So far, Mr Howarth has not succeeded, although Bloomberg tells us that the EU commission might be prepared to consider a derogation if some of the required modifications are made.

But, for Richard Parr, of Coventry-based Air Atlantique – the last UK commercial operator of the Dakota - this is a chicken and egg situation. "From a business point of view," he says, "we can't invest in the aircraft without knowing for sure whether they'll be able to fly or not."

For the moment, therefore, it looks as if the Dakota is grounded and while its passing will be mourned by hundreds of thousands of aviation enthusiasts, another remarkable facet of this whole affair is the lack of media (and political) interest – the only other media outlet covering the demise of the Dakota being the Belfast Telegraph.

As we remarked earlier, on the first flight of the rebuilt Vulcan, heritage aviation is probably one of the most popular spectator attractions in the country, events routinely attracting crowds in their hundreds of thousands - far more than football, in which every grubby little politician professes to take an interest, seeking to demonstrate an affinity with the "common man". It is thus a measure of how far the "colleagues", our own politicians and the media are up their own backsides that they can treat our passion with such disdain.

As we noted then, but extend our comments to the whole ragbag of these foul excrescences, they know diddly squat about what makes us tick – and care less. No wonder the majority of us, quite rightly, have little but contempt for them - especially as the Junkers Ju-52 flies on.