No sooner on than off? 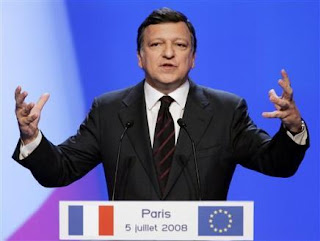 If it was looked at through the same lens used for national politics, the media would be all over it – but since it is "Europe" it goes virtually without comment.

This is the commission proposal at the beginning of this month to divert €1 billion of the expected surplus from next year's CAP fund to provide food aid for Africa.

Two weeks to the day, however, a group of eight member states are telling the commission to think again, questioning the legality of the scheme.

The refusniks are Austria, Britain, the Czech Republic, Denmark, Finland, Malta, the Netherlands and Sweden, all bar the Czechs being net contributors to the EU budget.

Furthermore, the EU parliament is querying the scheme, its budget spokesman Cezary Lewanowicz saying: "We have had enough of political declarations about spending funds when no solid legal basis is provided at the same time."

Although the commission was due to approve the scheme today, it is now having to reconsider it, as well as another plan for chuck another €600 million into the fishing industry to compensate it for increased diesel costs.

The member states are also questioning the legality of this payment and, rather than giving the commission an easy time of it, are calling for a cut of about €1.7 billion from the €116.7 billion 2009 proposed budget.

Perhaps it was rather unwise of the commission to show its hand so soon, effectively giving the member states an easy opening to claw back some of the contributions they make to the budget, but this last-minute refusal must represent something of an embarrassment for el presidente Barroso.

And that embarrassment could turn to humiliation if his flamboyant largesse is finally rejected by the member states – not that many people will be aware of it, given the reluctance of the media to tell it like it is. But you can imagine the fun the hacks would be having if Gordon Brown had been forced to make a similar climb-down.